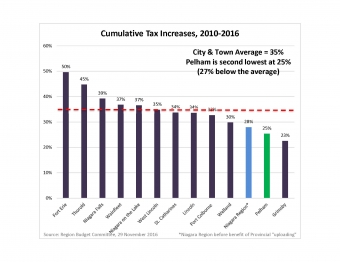 If you pay your property taxes by installments, you will know that your third installment of your 2017 property tax bill comes due on Friday. With this deadline, why not “take stock” of Pelham’s property taxes and compare with other Cities and Towns?

You will recall that the amount of property tax you pay to the Town of Pelham, to the Region, and to the Province (for Education) is not solely based on the Market Value Assessment of your property by the
Municipal Property Assessment Corporation (MPAC); one must multiply your assessment by each of these three tax rates and add them up for your total bill.

With the Region and the Province making some last policy changes and adjustments for rates and tax ratios, we now know that the combined property tax increase for an average residential property (which
is valued at $316,400) in Pelham is 2.0%. Because of those changes, that’s actually a 0.3% decrease from what I reported to you in April.

You can consider this 2.0% a “pocket-book” increase – an increase in the amount it cost an average residential property owner by adjusting for the average MPAC increase.

How do we measure whether that amount is “affordable” or not?

One independent way to judge whether Pelham’s taxes are “affordable” is to compare with inflation. For example, the Bank of Canada calculated that, over the last 11 years (January to January), inflation
increased the value of goods and services by 19.7%. Over the same period, Pelham’s combined taxes for the average residential property in Pelham increased by 19.7% – the same level as inflation. Notionally,
that means that the average home is paying the same level of taxes in 2017 that they did in 2006.

And, this 19.7% includes the equivalent of approximately 1.1% (in 2016) to fund the Pelham Community Centre. And, it also includes our annual increases for improved infrastructure – approximately 1.7% over
the last three years, for example – supporting new roads, pipes, and other capital improvements.

What about a more concrete way to judge? How about if we compare Pelham with other Niagara Cities, Towns, and Townships?

Pelham stands-out as the second lowest by increasing at 25% – including funding for the Community Centre in 2016. That’s 27% below the average increase. Only Grimsby was lower than Pelham (at 23%).
Even the Region was higher than the Town, at 29% (if you don’t include the benefit of Provincial uploading).

Pelham Council and I continue to ensure that we only minimally impact you and other property tax-payers while we work to increase the level and quality of services in the Town.


Check out historic charts or read past columns at  www.pelhammayordave.blogspot.ca  . Please contact Mayor Dave at  mayordave@pelham.ca  .