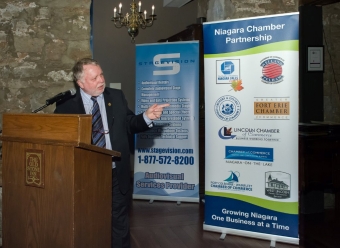 'Building Niagara Together' event brings together Niagara’s elected leaders to create connections and conversations that explore the issues that are important to taxpayers across the region.

The Honorable Ted McMeekin, Minister of Municipal Affairs and Housing was in Niagara on Thursday, May 11th as the keynote speaker at the annual “Building Niagara Together” event. The event, hosted by the Niagara Chamber Partnership (Fort Erie, Grimsby, Lincoln, Niagara Falls, N-O-T-L, Port Colborne-Wainfleet, Welland/Pelham, West Lincoln), along with sponsors Horizon Utilities and the Niagara Industrial Association, brings together Niagara’s elected leaders to create connections and conversations that explore the issues that are important to taxpayers across the region.

Minister McMeekin touched on the recently announced proposed changes to the Greenbelt Legislation, and applauded Niagara for adding lands to the Greenbelt. “We want to grow complete communities that attract jobs and investment and create vibrant, livable urban centres. This includes proposing transit-friendly density targets to improve commute times and reduce traffic congestion.” The Ministry announced that they will also be suggesting existing and planned transit and transportation corridors be mapped and protected for future use. Proposing stronger rules for municipalities to protect prime employment lands will also be proposed.

During the Minister’s consultations on the land use planning system, concerns were voiced regarding what should and shouldn’t be appealed to the Ontario Municipal Board. In response they are currently reviewing the scope and effectiveness of the OMB.

The Ministry has also been working on Bill 181, the Municipal Elections Modernization Act. If passed, the Act would help ensure the rules governing how municipal leaders are elected are clear, and reflect the evolving needs of communities. Ranked ballots, is an option being considered, which allows a voter to rank candidates in order of preference. There is some push for this in Niagara. Oakville has become the first municipality in Ontario to officially pass a unanimous resolution to adopt ranks ballots for the 2018 election. A shorter campaign period, by 120 days is also being proposed.

The Minister spoke passionately about a long-term affordable housing strategy. “We know that only with a shared sense of purpose, with all three levels of government, working together, can we ensure that people in communities across this province have access to the housing they need and deserve. I look forward to attending the Federal-Provincial-Territorial Minister’s meeting this June where we will be working on the development of a National Housing Strategy.”