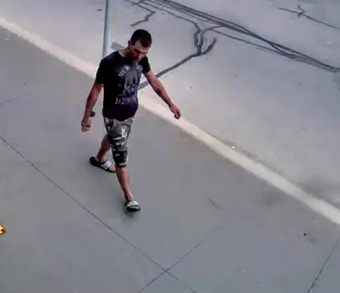 The bicycle belongs to an employee at Sobey's who is a special needs adult and requires his bicycle to get to and from work daily.

The Niagara Regional Police Service would like to thank the public for their assistance in the investigation into the theft of a bicycle from the Town of Beamsville.

As a result of information received from the public and witnesses, 29 year old Matthew FLETT of Beamsville was arrested for the alleged theft.  He was released on an appearance notice with an August 26th court date.
----------

The Niagara Regional Police Service is seeking the public's assistance in identifying a person of interest involved in the theft of a bicycle from the Sobey's parking lot in Beamsville.

The bicycle belongs to an employee at Sobey's who is a special needs adult and requires his bicycle to get to and from work daily.  On July 4th 2016, the bicycle was locked to a sign post and through the front wheel in front of the business.  At approximately 3:45pm the bicycle was lifted up over the sign and off the sign post.  The bicycle was last seen being walked away on its back tire eastbound on Greenlane Rd towards Ontario St. Beamsville.

The suspect is Male, 18-28 years, thin build. Short dark hair. Wearing a black tee shirt with a skull logo on the front, camo shorts and sandals.