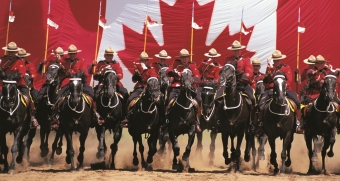 It's music to the ears and a beautiful sight to see. The RCMP Musical Ride has been thrilling viewers since - can you believe 1876 when the first ride was performed at Fort MacLeod.

The musical ride was actually the result of wanting to break the endless monotony of exercise drills in training the horses used by, at the time the North West Mounted Police. NWMP officers patrolled the prairies, frequently the only government official for the settlers. The NWMP were also played an essential role in preventing prairie fires.  Read more here:

The RCMP Musical Ride consists of 32 riders plus the Member in charge. It executes a variety of cavalry drills choreographed to music. The RCMP Musical Ride tours throughout Canada and internationally between May and October. It performs at approximately 40 venues each year. The present stables in Rockcliffe were built in 1993; the old stables are now the Visitor Center.

The gates open at 4:00 pm for a meet and greet with RCMP members and offering the public the opportunity to see the horses first-hand prior to the formal ride at 7:45 pm. Event goers will have the opportunity to watch a dog show as well with demonstrations by Jane Book’s Dog Obedience School. This part of the event is free to the public. Food vendors will be on-site as well.

Tickets are available on-line or at Sobey's in Niagara Region, Lowden's Feed, Meridian Credit Union and Pharmasave stores - check the website for actual locations. Tickets are $10. each with children under five free. The event will be held rain or shine. Don't forget a lawn chair. Limited tickets available.