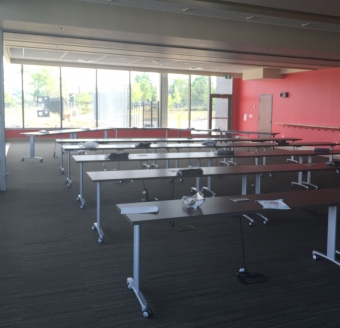 As part of the new facility, a publicly accessible community room with a capacity for over 120 people has been incorporated into the design.

The Niagara Regional Police Service (NRPS) is pleased to announce the public campaign for the naming of the community room at the new Headquarters and Niagara Falls patrol facility.

The new NRPS Headquarters and Niagara Falls patrol facility will become fully operational in the coming months. As part of the new facility, a publicly accessible community room with a capacity for over 120 people has been incorporated into the design. The room is a prominent feature in the public lobby, and is intended to be a multiuse / multipurpose centre for use by both the Police Service, and the community. This room will also serve the important functions of hosting the public meetings of the Police Services Board, as well as media briefings being conducted by the NRPS.

The Niagara Regional Police Service, the Niagara Police Services Board, and the Regional Municipality of Niagara are seeking the public's participation in the naming of this important and symbolic room. A selection panel with representation from all three groups has been established to evaluate nominations and select the name for this room.

Among the criteria the panel will be using to select the name, the following may be included:
Individuals and groups within the Niagara Region are encouraged to submit their name nominations to the panel coordinator Inspector Richard Frayne either through email at Richard.Frayne@NiagaraPolice.ca  or through regular mail at 68 Church Street, St. Catharines ON L2R 3C6.

To aid the selection panel, nominators are encouraged to submit a brief explanation or rationale behind the name being suggested.

Nominations will be accepted until noon on Friday September 9th 2016. The successful nominator will be invited to attend a special unveiling of the name at a date to be determined.