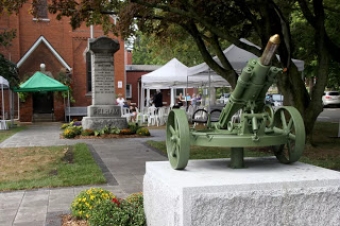 Mayor Dave Augustyn’s Column for the week of 12 September 2016.

On behalf of Pelham Council and the community, it was my honour to help unveil and rededicate two significant historic and cultural artifacts – a WW1 Cenotaph and the newly restored WW1 Mortar – at Old Pelham Hall on Saturday.

Because of the generous partnership of the Town with the Canadian Government, the Royal Canadian Legion, and caring citizens, these newly restored artifacts now stand as a constant reminder of the ultimate sacrifices paid by Pelham residents and other Canadian soldiers in World War I to secure our freedoms.

The beautifully restored cenotaph was completed last year, in time for our 2015 Remembrance Day commemoration. May the names of those 18 local soldiers killed in battle for our freedoms also be engraved in our minds and on our hearts.

The WW1 German Trench Mortar (called a minenwerfer) was captured by the 31st Battalion, Alberta Regiment, Canadian Expeditionary Force, in a raid on enemy trenches at Neuville Vitasse, France, on 23-24 of June 1918.

The mortar, considered a “War Trophy,” was awarded to the former Township of Pelham in 1921 by the Government of Canada. It was placed next to the Cenotaph in Ridgeville as a memorial to those from this area and the 31st Battalion, who made the ultimate sacrifice during the Great War 1914-18.

Historic research showed that Government provided this mortar with the understanding that it “belongs to the Crown and to the people of Canada…and was to be preserved and respected.”

Research also shows that this mortar is very rare. It was one of 101 trench mortars brought to Canada and is one of very few not melted down for the World War II war effort.

Sadly, through the 95 years since it was first placed here, memories faded and few knew the real history or recognized the significance of the mortar. The artifact deteriorated and there was talk of removing it altogether and replacing it with an artifact from the World War II or the Korean War.

Thankfully, a group of dedicated citizens and representatives came together to work with the Town and Council to help recommend what to do. Among others, these included Carolyn Botari, Dell Clark, Gary Chambers, Jake Dilts, Leo Giovenazzo, Mary Lamb, Bernie Law, and Jim Summersides.

Council and I deeply appreciate the work of these caring citizens, of Town Staff, the Royal Canadian Legion, Veterans Affairs, the Canadian Government, and the conservation company to fully restore and tell the story of this mortar for generations to come.

Further, we hope that these newly restored artifacts – outside our recently revitalized Old Pelham Town Hall – stand as a constant reminder of the ultimate sacrifices paid by Canadian soldiers in World War I to secure our freedoms. 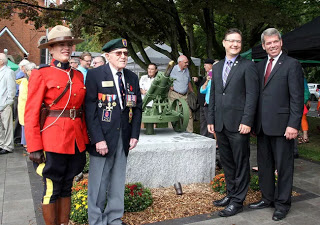 Special thanks to Jim Summersides, World War II Hero, for assisting with the unveiling of the newly restored mortar and plaque.

You may contact Mayor Dave at mayordave@pelham.ca to suggest future topic and view past columns at www.pelhammayordave.blogspot.ca .