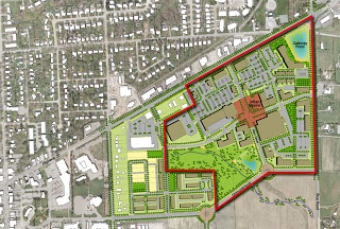 To help answer some recent community questions, here’s some of what I spoke about during a “State of
the Town” address to the Chamber of Commerce in early-October.

When it added 450 acres to the Town’s eastern “Urban Boundary” in 2000, the Ontario Municipal Board
guaranteed huge growth for Pelham. What wasn’t certain was the type of that growth. That’s why
Council and I worked so hard over the last decade to ensure that these “East Fonthill” lands integrate
with the existing community, protect sensitive environmental elements, benefit existing residents by
including public facilities and commercial amenities, and require attractive and pedestrian/cycle-friendly
form.

As you know, the commercial component is taking shape along Regional Road 20. While most stores will
likely open in early-2017, the Food Basics is scheduled for next month and the Tim Horton’s in
late-December. The buildings are purposefully closer to the road to help encourage walkability and slow
vehicle traffic.

In 2014, the Town approved an agreement to sell 7.7 acres of land to the Allen Group to construct a
medical centre and a retirement home. The +/-30,000 square foot Medical Centre should include 5-10
family doctors, a mini-pharmacy, and other health and wellness / allied professionals. When the Province
disallowed new “family health teams” for Niagara for nearly a year, establishing the Centre got slightly
delayed to 2017. The ~130-unit senior’s campus should offer independent and assisted living options and
is hoped to break ground in 2018.

In September, Council reaffirmed our priority of selling surplus lands at a maximum dollar value and for
the best community use. We also developed a draft lay-out for the property. You will recall that we
expect to generate an average of $600,000 per acre to help fund the Community Centre’s construction.

The Site Master Plan envisions a large, public square next to the future Community Centre that would
include interlocking brick, an outdoor theatre, a water feature, and trees and benches. While
contemplated a few years from now, Council applied in June for Canada Cultural Spaces Funding to cover
50% of the estimated $5.1 million project; we have yet to hear the results of that application.

Please contact Mayor Dave at mayordave@pelham.ca  with questions or ideas for future columns. Please read past columns at www.pelhammayordave.blogspot.com .