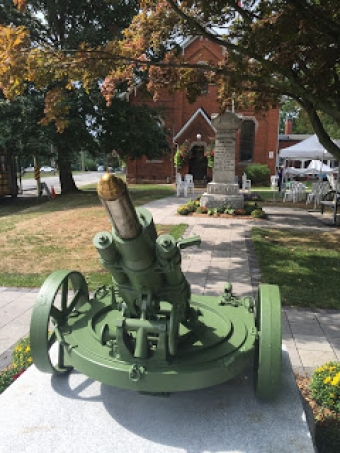 Each year in Pelham, the Legion and Cadets organize a number of very special ceremonies to
commemorate Remembrance Day.

On the Sunday before Remembrance Day – this year on November 6 – the commemorations will
begin at the Cenotaph at Centennial Park at 9:00 AM. During this special service, Veterans, members
of the Royal Canadian Legion Branch 613, the Ladies Auxiliary, the Royal Canadian Army Cadets, the
Fenwick Volunteer Firefighters Association, the Fabulous Fenwick Lions, and Federal, Provincial, and
Municipal political representatives will march to the Cenotaph and lay wreaths to remember those
brave men and women who served (and who continue to serve) our country during times of war,
conflict, and peace.

Then, at 10:00 AM, the Legion will organize another commemoration at Old Pelham Town Hall in
Ridgeville. This will be the first Remembrance Day service with the newly restored WW1 mortar.
This service recalls those that served from the Ridgeville area and often also includes
representatives of the Niagara Regional Police Service and several local veterans.

At 11:00 AM, Reverend Russ Myers and the congregation of Fonthill Baptist will host a special
church service. The ceremony usually includes reciting John McCrae’s “In Flanders Fields”, a
scriptural reflection, and a video that highlights local veterans.

Later, at 12:30 PM, the Legion will host a commemoration at the Cenotaph at Peace Park in Fonthill.
This service calls to mind those who served from the Fonthill area, and also includes the laying of
wreaths by members of the Fonthill Volunteer Firefighters Association, the Fonthill Lions, the
Fonthill Rotary Club, the Fonthill & District Kinsmen and some local businesses.

On Remembrance Day itself – this year on a Friday – the Legion will host a complete service at
Veteran’s Park at the Legion in Fonthill. The service begins at 10:45 AM so that the moment of
silence can occur at 11:00 AM. In recent years, and especially since the revitalization of the park,
many people participate in this Remembrance Day service.

The freedoms that so many of us might take for granted – to express ourselves, to participate in
cultural, religious, and political activities, to come and go as we please, to pursue a safe and happy
life – are all due to the sacrifices of Veterans and those who serve today. They sacrificed their
futures so that our future might be one of peace and of happiness.

Let us each take a few moments to participate in these Remembrance Day ceremonies so that we
can be thankful and rededicate ourselves to peace. Lest we forget.

You may contact Mayor Dave at mayordave@pelham.ca  or read past columns at
www.pelhammayordave.blogspot.com .