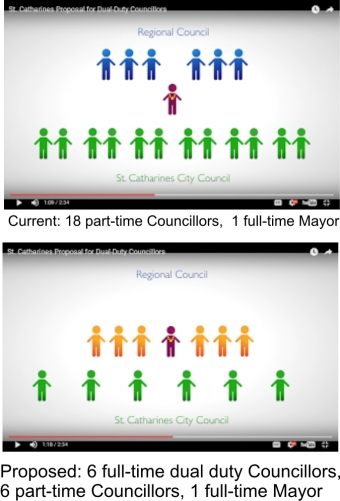 Do you think we should elect more full-time politicians in Niagara?

Should it be harder for people to represent the views of their neighbours? Or, should anyone be
able to serve part-time on local Council and offer their experiences from a job or other
activities?

People are asking these thoughtful questions about the “dual duty, ward Councillor” proposal
for the City of St. Catharines and Niagara Regional Councils.

The change would see St. Catharines represented by 13 people: the Mayor and six full-time
politicians would serve on both City and Regional Councils; the other six part-time Councillors
would serve only on City Council (6 FT + 6 PT + 1 FT = 6 PT & 7 FT).

Proponents suggest that by reducing the number of local representatives “communication,
cooperation, and accountability” would increase between the City and Region.

Opponents suggest that the change will create six more full-time politicians (who would want
“full-time wages”), attract partisans, and make local government less accountable and more
out-of-touch from average citizens. Others believe it would give more control to fewer people
(like at the NPCA where 11 of the 12 Niagara reps were appointed by the same Regional Council
on which they serve).

Interestingly, the majority from across Niagara – more than 58% according to a survey last Fall –
do not want the change.

And while proponents say that the dual duty “modernizes” communication and coordination of
local government, we know that other Regions made similar changes more than 25 years ago.
That was before AOL email (21 years old), Google (18 years), and “web browsers” like Netscape
(21 years). That was also before the widespread use of cell/smartphones and cheap
long-distance calling. At that time, everything was paper-based and getting a fax felt like a
novelty.

Further changes over the last decade include routine meetings between Regional and City /
Town chief administrative officers, planners, treasures, engineers, clerks, and Mayors. In some
Towns – like Pelham and Fort Erie – the Regional Councillor presents written updates to local
Council and answers questions every three weeks.

Because we solved these communication and coordination issues long ago, and because it will
concentrate power into the hands of fewer people and increase the number of full-time
politicians, I voted against the dual duty proposal last Thursday at Regional Council.

Since it was approved by a 17 to 11 vote, each local Council will also consider the proposal;
please let your City, Town or Township Councillor know your thoughts.