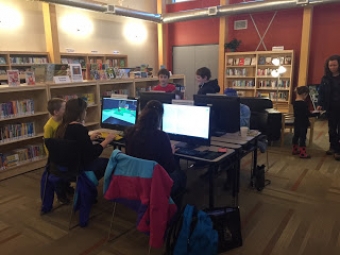 Word got around quickly last week that the renewed Maple Acre Library opened on Tuesday.
When I went by around 3:30 PM, it was a hive of activity!

Some folks worked in the Quiet Room (situated in the 1919 original Library), others used the
computers in the Technology area. A senior signed up for a Library Card for the first time, and
kids read and played in the new Children’s area. I met a resident reviewing the Pnyx collection
(from the former Pelham Continuation School / District High School) in the Historical Society
Collection reference room. At the same time, many came in for a quick tour and admired the
ceiling, the natural light, and the link between the old and new.

Council and the Library Board recognized years ago that the aged Maple Acre Library branch
required renewal; we struck a joint committee in 2008 to make recommendations. Because that
group didn’t make progress, the Town retained a consulting firm in early-2013 to conduct
facilities and operational reviews. This review recommended that the Maple Acre branch simply
become a kiosk-type operation. The Library Board and the community-at-large rejected this
recommendation.

To break the impasse, Council initiated creative problem solving sessions in late-2013 to
early-2014, which included Council, the Board, Friends of Maple Acre Library and the
community. Work on the challenge – “How might we provide the most appropriate library
services in Fenwick?” – led to an April 2014 resolution of Council to “continue library services at
the Maple Acre Branch.”

That spring, Council struck a tripartite working group to recommend a “state of the art, ideal,
and resilient library” in Fenwick. In September, the group proposed renovating and adding on to
the original 1919 Maple Acre building with a “learning commons”-type library with “rentable,
flexible, multi-purpose, open space” and an area for the community’s “significant historic
records.” Council accepted the report and approved a $1 million for the design / build of the
facility. The same group oversaw the Library’s design and construction began last June.

On December 28, Library staff and volunteers started setting up and getting ready for the
branch’s opening. While a few items need final tweaks (like the area around the ceremonial
front door), the Library is operational and staff plan an Official Grand Opening in February.

The Maple Acre Library has been a part of Fenwick’s history and downtown since 1919. I am
thrilled that the Library’s redevelopment maintains that history and continues Council’s
commitment for the ongoing revitalization of Downtown Fenwick. I encourage you visit the
renewed Library and I hope that the community enjoys and cherishes it for generations to
come.

You may contact Mayor Dave at mayordave@pelham.ca or read past columns at
www.pelhammayordave.blogspot.com.