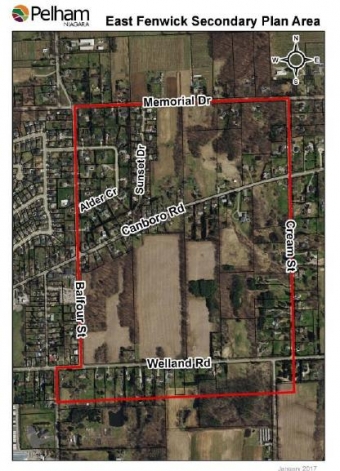 I was a little surprised during our Committee of the Whole meeting last week because the East
Fenwick Secondary Plan area is bigger than originally thought.

Last Fall, Town Council identified the preparation of a Secondary Plan for East Fenwick as a
priority for 2017. While we set aside funds over the last couple of years to re-start this detailed
planning exercise, Staff hadn’t been able to get it started until now.

As you will recall, previous Councils expanded the Town’s “urban boundaries” – the areas in
which one can build houses, stores, and other developments. Since the Town had installed
water and sewer services to the former “hamlet” of Fenwick in the early 1980s, the Town’s 1987
Official Plan made Fenwick an Urban Area and added development rights to those lands in
1990.

So, although not currently built-up, the area in which one can develop includes an additional
235 acres (95 hectares) from Cream to Balfour and between Memorial and Welland Roads.

So, what was my surprise? Staff included properties along Sunset Drive, Alder Crescent, and the
east-side of Balfour Street as part of this “secondary” planning process. When I asked about it
during our meeting, Staff stated that both the Town’s and Region’s Official Plans policies call for
all lands inside Urban Boundaries to be serviced (with water and sewers) and that part of the
plan needed to include studies to achieve that.

Committee approved the proposal that calls for a collaborative community engagement
process, including a community charrette, public meetings, open houses, and the use of an
internet tool called PlaceSpeak.

If approved at Council next week, Staff will issue a request for proposals for late-March and
work could begin as early as April. Staff suggested that the process could then take nine
months.

The East Fenwick Secondary Plan will provide the appropriate policy guidance – including
protecting key natural features, walkability, and linkages to the historic Downtown – so that this
large area might develop and integrate more fully into the Town.

Councillors and I will look forward to working together with the community as the Town
develops the East Fenwick Secondary Plan.


You may contact Mayor Dave at mayordave@pelham.ca  or review documents and read past
columns at www.pelhammayordave.blogspot.ca .