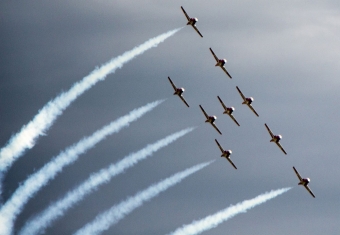 See the Snowbirds Aerial Display May 24th in Fort Erie

On May 24, the Canadian Forces Snowbirds will be coming to Fort Erie to perform an aerial display over the Town. Each year, the Snowbirds perform approximately 60 shows at 40 different locations throughout North America between May and October. The performances showcase the precision and skill of the serving members of the Canadian Forces.

In addition to welcoming the Snowbirds, the Town will also be welcoming home Captain Paul Faulkner, Snowbird 11, Advance and Safety Pilot and Team Coordinator. Captain Faulkner was born and raised in Fort Erie; graduating from Fort Erie Secondary School. He was also a cadet with 337 ‘Allan Troup’ Squadron – Fort Erie Air Cadets and began his flying career by receiving his private pilot’s licence through the cadet program.

Planning for the show is well underway and more details will be released soon.

The Snowbirds are a Canadian icon comprised of 431 Air Demonstration Squadron, Canadian Armed Forces (CAF) members. Pilots, technicians (aviation, avionics, aircraft structure, supply), mobile support operators, resource management support clerks, an engineering officer, a logistics officer and a public affairs officer representing all three elements (Army, Navy and Air Force), work as a team to bring thrilling performances to the Canadian public. Serving as ambassadors, the CF Snowbirds demonstrate the high level of skill, professionalism, teamwork, discipline and dedication inherent in the men and women of the CAF and they inspire the pursuit of excellence wherever they go in North American.

With nine Show Pilots, two Team Coordinator Pilots, one Public Affairs Officer, 12 technicians, one Supply Technician, and one Mobile Support Vehicle operator, the Air Demonstration Flight travels across North America each year. They perform approximately 60 shows in about 40 locations between May and October. The Air Demonstration Flight is comprised of 11 jets, the Snowbirds’ Mobile Support Vehicle (MSV) and Light Support Vehicle (LSV), bringing their show to both large and small communities alike. While the Air Demonstration Flight is deployed, the Squadron, led by the Snowbirds' Commanding Officer, provides support to the deployed elements, begins to train the following year’s team, and ensures that the other home based aircraft are well maintained and available should the need arise.