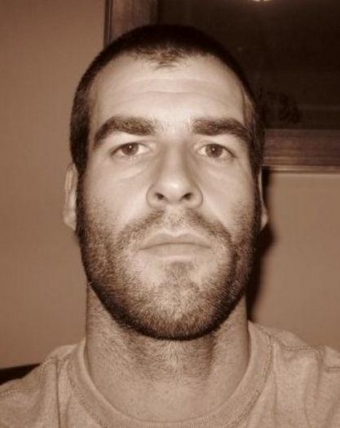 Justin Kuijer remains at large and is presently wanted for the offence of attempted murder in relation to the RBC incident and 1st degree murder in the death of his step-son.

He was arrested on the strength of a Canada Wide Warrant issued by the Niagara Regional Police Service (NRPS). Uniform officers from the Kenora Detachment of the OPP responded to a 911 call from a member of the public. The 2009 Pontiac Montana van was located in a parking lot with Justin Kuijer inside. Justin Kuijer was arrested without incident. He was alone at the time of his arrest.

Justin Kuijer will be returned to the Niagara Region in the days to come.

NRPS Homicide Detective Sergeant Brian Bleich, the lead investigator in this matter states, "We would like to thank the public, the media, and our law enforcement partners for their continued support over the last few days. Their efforts have led to the capture of Kuijer, and some small semblance of closure for the victims and their families."

As the matter is now before the courts, protecting the integrity of the investigation and the judicial process is paramount, as such no further comments regarding evidence will be made. 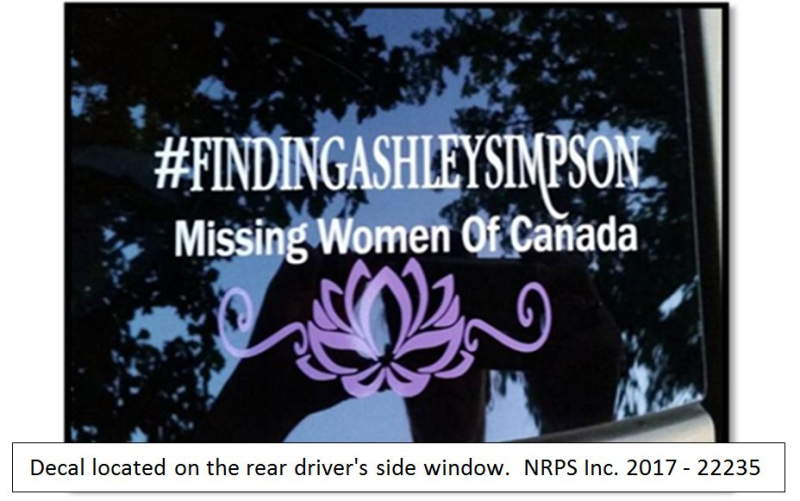 As a result of the ongoing investigation by detectives (1 District St. Catharines, 2 District Niagara Falls, Child Abuse Unit, Homicide Unit, Forensic Services Unit) from the Niagara Regional Police Service (NRPS) we will be seeking a Canada Wide Warrant for the arrest of Justin Kuijer.

The warrant for Kuijer will be for the attempted murder of a RBC bank employee on March 17, 2017 and for 1st Degree Murder in relation to the death of 7 year old Nathan Dumas.
Justin Kuijer should be considered armed and dangerous. Should a member of the public observe or know the location of Justin Kuijer, do not approach him. Call 911.

When Kuijer fled the scene of the RBC bank located on Martindale Road in St. Catharines he was driving a dark grey 2009 Pontiac Montana van, Ontario licence #BYTE392. On the rear driver's back window was a pink floral tribute sticker in relation to missing person "Ashley Simpson". The public should be reminded that the decal can be removed and they should not limit their attention to just that feature of the van.
Anyone knowing the whereabouts of Kuijer or the van should contact their local police service by calling 911.

After consultation with the family, NRPS detectives can now confirm that the child transported from the Queenston Street, St. Catharines residence died in the early morning hours of March 18, 2017.  The child has been identified as 7 year old Nathan Cave.  He is the step son of Justin Kuijer.

The exact cause of death of Nathan Cave is not being released.

Detectives from the Niagara Regional Police Service (NRPS) continue to investigate the incident that occurred at the RBC on Martindale Road in St. Catharines on March 17, 2017.

Justin Kuijer remains at large and is presently wanted for the offence of attempted murder in relation to the RBC incident.

The adult female victim remains in hospital in stable condition.

The NRPS are not investigating this incident as a robbery or a domestic violence matter.  The victim and Kuijer were known to each other professionally.

At approximately 10:16 AM on March 17, 2017, the NRPS along with Niagara Emergency Medical Services responded to an address on Queenston Street in St. Catharines for a report of a child in medical distress.  The child was subsequently transferred to hospital in critical condition.  This remains under investigation.

The identity or the relationship between the child and Justin Kuijer is not being released at this time.

The circumstances that connect the Martindale Road location, the Queenston Street location and Justin Kuijer are evidentiary in nature and are part of the investigation.

Anyone with information as to the whereabouts of the Justin Kuijer or the grey 2009 Pontiac Montana van (Ont. BYTE392) he was driving, are asked to contact the NRPS immediately.

Justin Kuijer should be considered armed and dangerous.  Should a member of the public observe or know the location of Justin Kuijer, do not approach him.  Call 911.

The investigation by NRPS detectives has learned that 43 year old Justin Kuijer of St. Catharines entered the bank and stabbed a female employee.  Kuijer then fled the scene in a 2009 Pontiac Montana van, grey in colour (Ontario Licence BYTE392).

The victim was transported from the scene by NEMS to a local hospital.  She is in serious condition.

The RBC and an area of the parking lot where closed while detectives investigated.  The scene has been processed by detectives from the NRPS Forensic Services Unit.  The bank remains closed.

Justin Kuijer is wanted by the NRPS for the alleged offence of attempted murder.

At the time of the incident Kuijer was wearing:

A second scene is being held in relation to this incident on Queenston Street in St. Catharines.

Kuijer should be considered armed and dangerous. His current location is unknown.

It is believed the victim was targeted by Kuijer.

This investigation remains ongoing by detectives.  Anyone with information as to the location of Kuijer or the Pontiac van is asked to call 911. 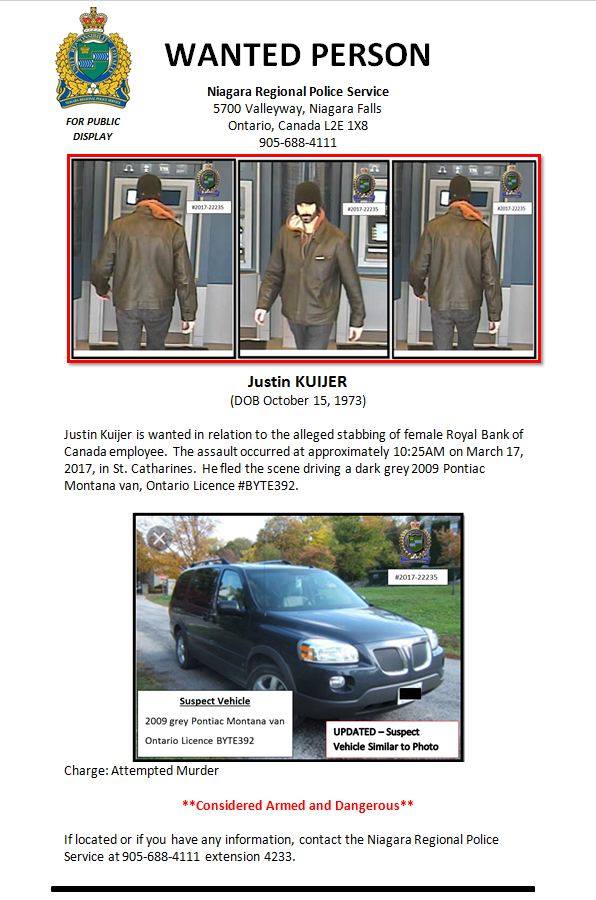 Telephone - 1-800-222-8477 (TIPS)
Online - www.niagaratips.com
Text - 274637(CRIMES), keyword Niagara, then your tip.
Crime Stoppers guarantees that you will remain anonymous through any of the methods offered to provide tips. You may also be eligible to receive a cash reward of up to $2,000 if the information leads to an arrest.