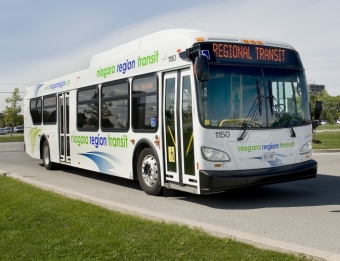 Niagara Region Council has signalled strong support for the future of inter-municipal transit in Niagara by endorsing in principle the creation of a consolidated transit system along with the municipalities of Niagara Falls, St. Catharines and Welland.

"Developing an effective inter-municipal transit system has been a priority for me as Niagara's Regional Chair. Residents, businesses, and students will all benefit from a system that enables them to get from A to B without a car. Inter-municipal transit is yet another example of Team Niagara working together and delivering results. I thank the Mayors of St. Catharines, Niagara Falls and Welland for their collaboration on this region-wide initiative. I look forward to all Niagara municipalities approving this important plan that will get our region moving." ~ Regional Chair Alan Caslin

This follows recent unanimous approvals from St. Catharines, Niagara Falls and Welland city councils to also approve in principle the consolidation of their transit services into one entity with Niagara Region.

To move towards a consolidated model, staff from each of the four municipalities has been directed to work together to develop a Memorandum of Understanding outlining a governance framework and how key issues will be addressed by all parties as part of the next steps in the process.

Niagara Region also began the process to officially become a transit provider in Niagara. This process began at the request of the Niagara Falls, St. Catharines and Welland. To do this the Region must have the power to establish, operate and maintain a permanent inter-municipal transit service uploaded from Niagara’s local municipalities. In order for this bylaw to come into effect, it must be approved and adopted by the majority of Niagara Region’s municipalities representing the majority of Niagara’s population. Right now the Region operates Niagara Region Transit as a pilot service; this “triple majority” process would be needed to make an inter-municipal transit service like this permanent.

The recommendations to move towards a consolidated transit system were the results of the work undertaken by the Inter-municipal Transit Working Group. Since early 2016 this group has been working to develop strategic recommendations for the future of transit services in Niagara that could provide service to the entire region. These actions support Council’s strategic priorities under Moving People and Goods to support municipalities in developing long-term solutions for transit.

The Inter-municipal Transit Working Group is led by the Mayors and CAOs from St. Catharines, Welland and Niagara Falls with support from the Regional Chair and Niagara Region CAO. This group has been working in cooperation to find a preferred model for transit services in the region and has worked to continue to make improvements to the existing Niagara Region Transit service during the pilot period.

"Inter-municipal Transit is an important service for our Region. It has been a priority for both Regional Council and City Council to establish a permanent inter-municipal service for Niagara. Ensuring people have reliable public transportation services to access jobs, recreation and travel opportunities both locally and in neighbouring municipalities is critical to our economic success." ~ Mayor Frank Campion, Welland