Ducks in the News Again - Kiwanis Duck Race No Go, Draw a Go! 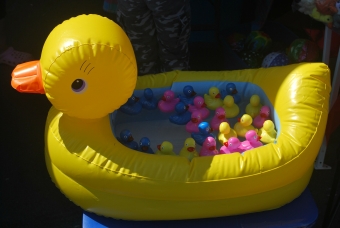 No Ducks in Port Dalhousie this Father's Day - first time in 20 years.

Lucky draw goes on without ducks

For the first time in 20 years, the Kiwanis plastic ducks will not be racing down Port Dalhousie Harbour this Father’s Day but the community can still win great prizes as part of the Kiwanis Club of St. Catharines’ annual Propack Kiwanis Duck Race.

City staff, in consultation with the Kiwanis Club of St. Catharines, mutually agreed to cancel this year’s Duck Race on Sunday, June 18 due to safety concerns associated with the record water levels in Lake Ontario and the Port Dalhousie Harbour. Nonetheless, the Propack Kiwanis Duck Race Draw will still take place on Sunday, June 18 at 2 p.m. The draw be held in Rennie Park. Everyone is welcome to attend.

“The Duck Race has been an annual tradition, so we’re very disappointed to have to cancel it,” said Cindy Paskey from Kiwanis Club of St. Catharines. “But the Duck Race in the form of a draw this year will still feature great prizes to be won. And 100 per cent of the net proceeds from every ticket is re-invested back into Niagara communities, supporting our kids and families.”

First prize for the lucky draw is $10,000 and there are 10 secondary prizes of $500. Duck Race tickets can be purchased from Kiwanis members and at Goodwill Niagara and Avondale stores.

“The Kiwanis Club does tremendous work in our community,” said Rebecca Follows, co-owner of Propack, title sponsor for this year’s Duck Race. “We’re proud to work with them on the Duck Race, we encourage everyone to get their Duck tickets for the draw and we look forward to supporting this event next year.”

“The City was eager to once again be part of the Duck Race,” said Lori Mambella, the City’s manager of programs and culture services. “Public safety is always our priority, and unfortunately the conditions of the site aren’t ideal for the Duck Race. We look forward to working with Kiwanis on future events, especially the Duck Race.”