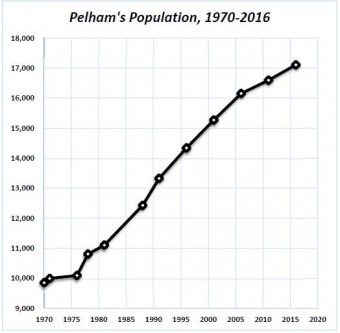 When I grew up and attended St. Alexander School, the Fonthill Plaza didn’t exist: no Shopper’s Drug Mart or Beer Store or Giant Tiger. In fact, I have distinct memories of walking through long grass and
along a warn footpath to the Pelham Library – which was situated in the basement of Pelham Town Hall!  And, the school was just an “L-shaped” building in those days – before the addition in the 1990s. The
octagon-shaped Church along Hwy 20 (where the current playground is) was replaced in the 2000s.

The railway tracks – still in use along Station Street – had yet to be named the Steve Bauer Trail. With the Fonthill Firehall on South Pelham, it wasn’t odd to hear the siren calling the volunteers. And, school
mates crossed Highway 20 to get to a treat at the convenience store where the Royal Bank now stands.

The Post Office likely moved from its location on Pelham Street (now ForestGreen creations) in the 1980s. And, the now iconic Fonthill Branch of the Pelham Public Library wasn’t constructed until the
mid-1980s.

I also distinctly remember playing in dirt piles during the building of the roads and homes on Woodstream Boulevard and Spruceside Crescent. And the Town built the then new Pelham Arena –
which replaced the outdoor rink in “the Pit” – in the middle of a farmer’s field in the mid-1970s.

Looking back at the population growth, one can see the reasons for these changes.

Just like we hear a few people complaining today, I remember a few folks in the 1970s and the 1980s and the 1990s expressing concern about the Town growing too quickly.