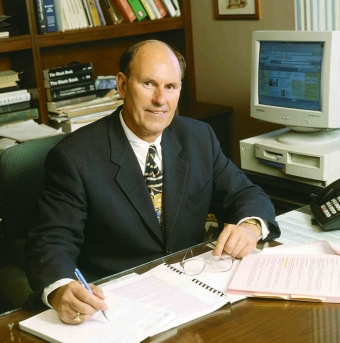 Niagara Region is pleased to announce that Tom Rankin is the 2017 recipient of the T. Roy Adams Humanitarian Award in recognition of his dedication to community service.

Niagara Region is pleased to announce that Tom Rankin is the 2017 recipient of the T. Roy Adams Humanitarian Award in recognition of his dedication to community service.

Tom is a strong advocate for Niagara and is very committed to making it a better place to live. He is a unique philanthropist who gives generously and has a positive impact on projects designed to enhance local communities.

When it appeared there would be a shortfall in funds to construct the gateway arch over Lundy’s Lane for the War of 1812 Bicentennial celebrations, Tom brought together a group of civic-minded contractors and volunteers to ensure the project was completed on budget and within an extremely tight timeline.  Taking the lead as general contractor, he re-engineered the archway to make it better and ensure it would be a proud moment for Canadians celebrating 200 years of peace between Canada and the United States.

In 2015 he supported the construction of a memorial for the Fallen Workers of the Welland Canal.

His commitment to the Rankin Cancer Run initially launched in 2005 as a one-day event in St. Catharines raised $230,000 with all proceeds going to local cancer care facilities. By the end of 2010 the Run had raised $1.9 million and at the end of 2015 the total proceeds going back to the Niagara community were $5.5 million.

In addition to supporting the Rankin Cancer Run, his company has contributed significantly to the Niagara Health System, Hospice Niagara, Goodwill Niagara, and Jericho House.  He has also been a generous supporter of Pathstone Mental Health for the past 3 years.

He has also provided title sponsorship for one of the ice rinks at Seymour Hannah Four Pad Arena in St. Catharines, completed major pledges for Brock University and Niagara College and has supported the Celtic Music Interpretative Centre in Judique, Nova Scotia for a decade.

In 2012, as part of being the successful bidder for a new downtown arena in St. Catharines, Tom donated 2 pedestrian bridges to connect the Meridian Centre to the downtown core.

This year marks the fifteenth anniversary of the T. Roy Adams award which is presented annually to a Niagara resident who exemplifies the values and dedication to community service of the late T. Roy Adams.  Mr. Adams served on Regional Council as Mayor of St. Catharines from 1976 to 1985 and as a Regional Councillor from 1988 to 2002.​