Recommending an Audit, but Refusing the Money (Pelham) 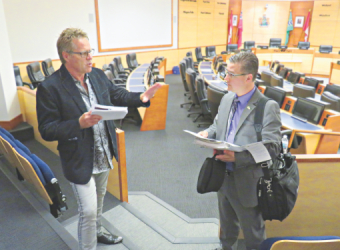 Niagara Regional politics got even stranger last week when a Niagara developer offered a lot of money – $50,000 – to the Niagara Region Audit Committee. His proposal was to get the Committee to recommend that Regional Council ask Pelham Council to audit two Town matters – a parkland over-dedication transaction and development charge credit agreement.

You will recall that some Regional Councillors started questioning Town issues on March 30, 2017 when Regional Councillors Barrick (Port Colborne) and Gale (Niagara Falls) put forward a motion that included 13 accusations about Pelham’s debt, finances, and property taxes. Why at the Region? They said the Region could talk about Pelham because the Town’s debt might impact the Region’s Standard & Poor’s AA Credit Rating. This was later disproved since the 2017 S&P report shows that the Region could borrow an additional $282 million before risking a credit rating downgrade.

Town Staff responded with a 335-page comprehensive report that refuted each of the 13 claims in the motion. Yet, instead of letting me respond to the March 30 motion as Pelham’s rep, a majority of Regional Council referred the matter to a June meeting of the Regional Audit Committee.

On April 3, Town Council reviewed and endorsed the Town’s response to the Regional motion. Worried that Pelham residents might have questions, Council directed Staff to organize an “Evening with the Experts.” About 100 people attended the panel discussion on April 24, with 17 people asking questions of Town Staff and professional advisors.

Then Town Staff attended and answered all questions at the June 12 Regional Audit Committee meeting. Despite my insistence that the Region has no jurisdiction in Town matters, Committee Chair Quirk (Grimsby) allowed specific questions about Pelham including parkland over-dedication, property purchases, water and tax rates, development charges and credits, library budgets, and cemetery fees. After these Town responses, the Audit Committee approved a motion that removed all references to Pelham.

When that revised motion went to the June 29 Regional Council meeting, Rainer Hummel, a Niagara developer, made numerous accusations about Pelham regarding a parkland over-dedication and a development charge credit agreement with Fonthill Gardens. Despite my request, the Regional Chair refused to recognize that the presentation was outside the Region’s jurisdiction. Following the presentation, a majority of Regional Council referred the matter to the September 18 Regional Audit Committee.

During the September 5 Town Council meeting, Staff and Callum Shedden, the Town’s lawyer, reviewed and refuted each of the claims made by Mr. Hummel. Mr. Shedden also confirmed that the Region has no jurisdiction in these matters under the Ontario Municipal Act. The Town published the accusation’s disproof and posted information about parkland over-dedication at www.pelham.ca/ParklandFAQ.

Town Council sent a strongly worded motion and Mr. Shedden to outline the Region’s lack of jurisdiction to the September 18 Audit Committee meeting. Instead of heeding the legal advice, the majority of the Audit Committee voted to allow Mr. Hummel to speak again. During his presentation, Mr. Hummel admitted to never raising his concerns with the Town or myself directly. Instead, he said he had a cheque for $50,000 for the Region to pay for the Town to undertake an audit of the parkland over-dedication and development charge credit agreement.

The committee “endorsed” the funds and recommended that Regional Council ask the Town to undertake an independent audit, but with the involvement of Mr. Hummel and Regional Staff.

I have thought a lot about and spoke to many people about this matter since last week.

For example, neither Town Staff nor Fonthill Gardens fear an audit, because it will then clearly show that all parties handled the parkland over-dedication and credits appropriately and legally. Some folks asked me why the Region’s Audit Committee was baited by the cash and agreed to the involvement of a developer in what should be an independent process. Others still cannot understand why some Regional Councillors interfere in Pelham business.

I will recommend to Pelham Council, therefore, that we initiate an independent, third-party audit of all transactions and documents related to the 3.3-acre Parkland Over-Dedication to the Town by Fonthill Gardens and a 2015 Development Charge Credit agreement between the Town of Pelham and Fonthill Gardens. While I am certain that we followed all laws and appropriate policies with these transactions, I hope than an independent audit will help satisfy those with questions. 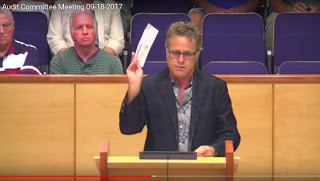 Developer Rainer Hummel holds an envelope during Regional
Audit  Committee meeting that he said contained a cheque
for $50,000 to pay for an audit of the
Town of Pelham finances. Credit: POSTMEDIA

Yet, I will not recommend that Pelham Council accept the lure of the money. I believe it is ethically inappropriate to accept the $50,000 because it sets an unacceptable precedent of granting wealth great influence and privilege in municipal decision-making. Further, it is beneath the high-standard that the public expects from Town and Regional Councillors and Staff.

Watch for Town Council to discuss these types of motions at our next meeting.

You may contact Mayor Dave at mayordave@pelham.ca  or read past columns at www.pelhammayordave.blogspot.ca