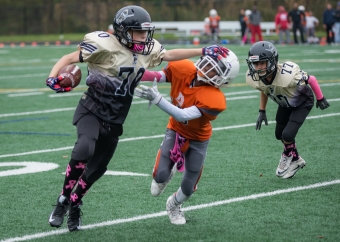 On defence Hunter Baxter finished the game with 1 sack 5 tackles in the backfield and a forced a  fumble. Nick MacKinnon and Brett Wall dominated they defensive side.

Peewee
Niagara Generals 0 vs Durham Dolphines 17
Niagara Peewee Generals lost their second in a row to drop to 4-4 on the season to the Durham Dolphins ( 6-2).

“Our defence showed up to hold Durham to just two scores lead by Wyatt Brown with two interceptions and ran a wide Field goal attempt out of the end zone.”

Peewee Generals will prepare for their playoff to be played next weekend.