Volunteers are the Heart of Pelham! 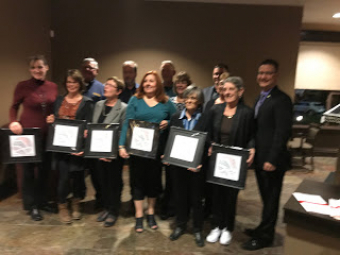 We hosted one of Council’s and my favourite events last week – the Town’s annual Volunteer Appreciation. That’s when we thank the Town’s key volunteers for their hard work and dedication to improving our Town and for embodying the vision of a vibrant, innovative, and caring community.

During the event, I looked back over the last year to demonstrate how volunteers are the heart of our Town.

First, volunteers organize and run our Town’s significant public events. The Fonthill Bandshell Concert Seriescelebrated their 12th Season with the best talent, the largest crowds, and serving as a huge benefit to small town feel of Pelham. The Fenwick Lions & Lioness members hosted the Classic Car Raffle this fall and sold more than 7,000 tickets to support seeing eye dogs. With growing membership, the Fonthill Lions & Lioness welcomed drone racing, organized the very successful and fun Sliderfest with pledges to support the “Lions Lift” elevator in the Pelham Community Centre.

In addition, the members of the Canada Day Committee expanded the Canada Day celebrations to encompass Canada 150 commemorations and put together a wonderful event. And, the dedicated members of Pelham Summerfest helped maintain our small-town feel while hosting the most participants yet – more than 40,000 people attended the four-day festival – and being named one of the Top 100 Festivals in Ontario.

Second, other dedicated people volunteer with sport. For instance, because of its selfless volunteers, the Pelham Minor Basketball Association is the best and largest basketball association in all of Niagara; they are looking forward to the Community Centre become a home for their champion players. The Pelham Platform Tennis volunteers are seeing a resurgence of sport and are working with the Town to stay in their current location at the existing Arena on Haist Street.

Amazingly, the Pelham Minor Baseball Association volunteers had to cope with huge growth in participants this year – more than 36% increase in players – which stretched their resources.

And, the Pelham Minor Hockey Association celebrated 50 years of hockey in Pelham by growing their participation and making a significant donation to Community Centre.

At the same time, the Niagara Centre Figure Skating and the Welland Raiders Lacrosse (soon to be Pelham Raiders again!) both decided to bring their sport back to Pelham and use the Community Centre as their home.

Third, let’s not forget members of our service clubs who work to enhance community. For instance, the Kinsmen continue to enhance and expand their charitable activities – like the Home Show, Craft Show, and Citizen of the Year – while making a donation to name the multi-purpose room in new Community Centre. And the Rotary Club not only worked to eradicate polio from our world, but they also raised funds for Wellspring Niagara and expanded their efforts to involve young people. And, the Royal Canadian Legion members continue to host more and more events at their Hall – which is always booked – and also continue to support and honour our community’s veterans.

Fourth, other volunteers serve on various Town Committees and work to ensure that our Town is progressive and forward thinking. For instance, the Library Board not only oversaw expanded services and the opening of the new Maple Acre branch, but also work to ensure the Library constantly innovates and grows. The Seniors Advisory Committee worked to organize of a Regional age-friendly conference and developed a successful nomination for the World Health Organization to designate Pelham as an Age-Friendly Community. Then there’s the members of the Active Transportation Committee who developed an Active Transportation Master Plan to increase walking and cycling infrastructure and also initiated four “Slow-Roll” cycling events.

And, so many others volunteers across Pelham to continue to enhance many activities and efforts to improve our Town.

That’s why we also presented the “Peer Award” at the event as a special way of recognizing outstanding individuals among these amazing volunteers. Each community-based group or organization in Pelham nominated one of the most exemplary volunteers from among their group of exceptional volunteers.

Congratulations to these and all volunteers in Pelham! You serve as the heart of our community!