The officers were joined in this special occasion by their families and Niagara Regional Police Service Chief Bryan MacCulloch. 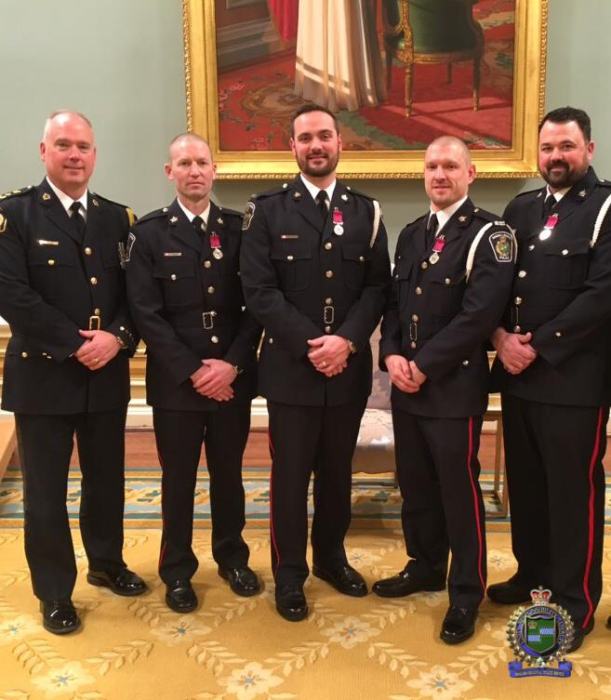 "I am proud of all the great work our officers do on a daily basis, but particularly these officers and how they handled themselves under the most challenging of situations.  Having the chance to be present and witness them receive their medals was an honour as a fellow officer, and will definitely be a highlight of my time as Chief."

The Circumstances Leading to the Award

On October 10, 2015, at approximately 7:38PM, 3 District Welland uniform officers received a dispatch call for a despondent man who was threatening self-harm and making threats towards the multi-unit apartment building he lived in.

A number of officers responded to the scene.  When the officers arrived on scene they commenced an evacuation of the nearby apartment units. Once the main hallway was believed to be safe and all the residents removed, the officers contained the area until the Emergency Task Unit (ETU) could arrive on scene.

Constables Daniel BASSI, Jake BRAUN, Neal RIDLEY, and Allan RIVET all took up positions near the despondent man's apartment. While the officers awaited the arrival of ETU, the man opened his apartment door, walked out into the hallway and appeared startled upon seeing the officers.  The man, who had three rifles slung over his shoulder abruptly returned to his apartment and shut the door behind him.

Constable RIDLEY commenced a dialogue with the man through the door.  The man indicated that he would exit his apartment without any weapons.  However, when he exited the apartment into the hallway and walked towards Constables RIDLEY and BRAUN, he reached into his waistband and retrieved a handgun, and proceeded to shoot directly at the officers.  Constables BRAUN and RIDLEY who were both injured, were subsequently able to discharge their service weapons.  Constable RIDLEY's injuries were serious and he continues to recover.

Constables BASSI and RIVET who were at the other end of the hallway, observed the man shooting at the officers and they immediately returned fire.  As a result of their decisive action, the man was shot and the threat to Constables RIDLEY and BRAUN was stopped.

The officers involved in this incident were fully aware of the heightened danger associated with this particular radio call.  It is only through their heroic actions that no one else was injured or killed.  Had the man escaped from the building with the loaded rifles and handgun, the risk to the public would have increased significantly.  A total of seven firearms were seized from the man's apartment.