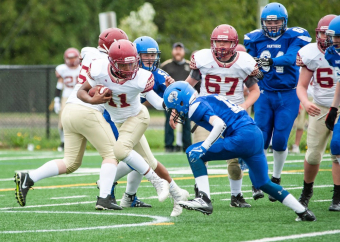 Niagara Spears Senior Varsity  football team came home with the only victory from a Saturday road trip which featured all 4 Niagara teams.


Justin Succar scored the offensive touchdown for the senior varsity Spears while Mitchell Demers returned an interception for the second touchdown.

The tier 2 JVs faired a little better but lost a heartbreaker 13 to 12 to the Toronto Jets. Landon Leger scores both TDs for the Spears

Marshall McCray, no.11 scampers for additional yardage in the  Niagara Spears - Cumberland Panthers bantam game played in Ottawa on Saturday.