UPDATE: Stephane Needs To Get Home 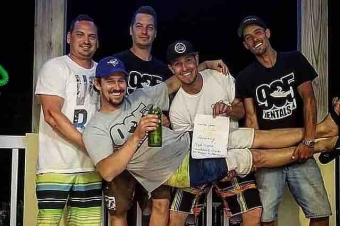 Imagine going off to Bermuda, only to be stranded there? In some respects this could be a nice extension, but not necessarily one that is affordable. So here's the story...

Brian Grant and his team from 905 Rentals in Long Beach have been competing in the Poseidon Games, an international hydro flight competition they are currently ranked in 9th place. This competition has been plagued with problems. The first event was cancelled. The second took place in Australia with the organizers actually buying the flights for competitors to attend. The third event was supposed to be in Bermuda June 1-3rd.  Again cancelled 10 days out...

Since the 905 Rentals team had their flights booked, they decided to go to Bermuda and enjoy a vacation prior to their busy season starting on the water here.  It was a fun trip, they guys even made the news after finding a message in a bottle.

Now the problem,  Stephane - one of Brian's team members had lost his passport, had it replaced but his Visa # for Canada was not included with the new passport. Stephane is from France, living and working here in Canada.  So now he is stuck in Bermuda while the visa paperwork is being processed.

Brian and his friends have started a gofundme page to help Stephane get home to France while waiting for his new visa documentation so he can return to Canada.

Here is the link to the gofundme page. https://www.gofundme.com/help-steph-get-home