Should your property taxes pay for self-promotion by elected Councillors? 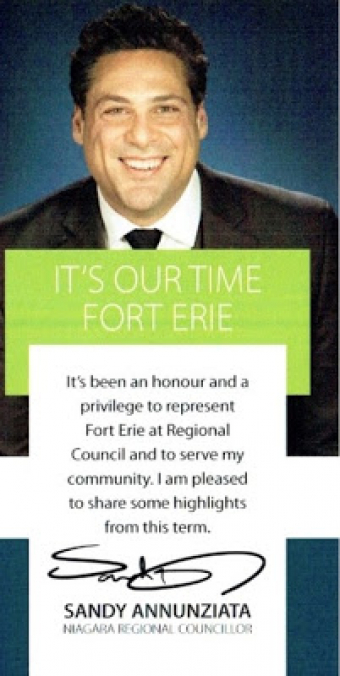 The fliers included their pictures and spoke to only their efforts. To many, the fliers read like re-election material.

Do you think that your property taxes should pay for self-promotion by elected Councillors?

This was the issue at our last Regional Council meeting when I brought forward a motion to end the practice of some Councillors using public funds to send self-promotional fliers to residents.

You see, this year Councillors Annunziata (Fort Erie), Barrick (Port Colborne), and Quirk (Grimsby) used Regional staff resources to prepare self-promoting fliers and public tax dollars to mail them to residents in their Towns/City. Councillor Quirk mailed something in January and again in May, when the others followed his lead.

These fliers told a story they wanted to tell about their work on the Regional Council. The fliers included their pictures and spoke to only their efforts. To many, the fliers read like re-election material.

In the case of Councillor Barrick’s flier, it drew the ire of Port Colborne City Council because he tried to contrast the tax increases and water rates between the Region and that City. Many pointed that out as a false comparison because both have different roles and responsibilities. For instance, since the Region sells wholesale water to Niagara’s cities and towns, the City’s water rates also include the increases from the Region. Further, the Region makes up approximately 50% of the blended property tax bill and takes advantage of tens-of-millions of dollars of “uploading” by the Province for their programs and services; Cities and Towns represent 30% of the final tax bill, cannot use that uploading advantage, and provide totally different local services and programs.

The tax rate comparisons they touted weren’t even correct. They quoted “1.4%” or “1.48%” as the four-year average tax rate increase; it is actually a cumulative total of 6.02% for the four years and therefore an average of 1.50%.

(Ironically, despite their self-congratulations, the fliers fail to mention that this term’s cumulative tax increase is actually 4% higher than last term’s 5.77%, when I chaired the Region’s budget.)

Each of the fliers also mention infrastructure work or other initiatives by the Region in the specific city or town represented by the Councillor. And, while there’s the photo of the Councillor, the fliers contain no mention of the other Regional representative for that City or Town – the Mayor. It’s as if the Councillor were acting alone and that the projects and initiatives were their work alone.

Responding to my motion, the Councillors stated that they need to be able to communicate directly with residents about improvements by the Region. They state that local media does not always carry the information that they shared and not all households follow them on social media.

The three Councillors complained about my motion to disallow future self-promotional initiatives; they also stated about me that “His arrogance is astounding, that he would assume how best we should communicate with the residents of Fort Erie, Grimsby and Port Colborne…”

Most people who have spoken to me about this issue see their fliers as an improper use of public resources and funds for self-promotion. Some have even called it electioneering.

Others wondered why they didn’t include their respective Mayors on the fliers as the other representative for the community; aren’t the Mayors also responsible for the great things that they highlight in those Towns and City?

A few others wondered what it would cost if all 31 Regional Councillors did this same type of mailing – and if it were done every quarter as Councillor Quirk has done this year. I estimate that it would be over $100,000 per year if you included Staff time, printing, and distribution.

Since the matter was deferred to a future finance committee meeting, I would like to share your feedback during the debate. It this practice wrong, a misuse of public funds, and something that should be stopped? Or, is this an important way of communicating with you and other members of the public and should be funded by your property tax dollars?
________________________

Please follow this link to get to a folder with the fliers that were designed and send using public funds.


You may contact Mayor Dave at mayordave@pelham.ca  or review the fliers at www.pelhammayordave.blogspot.ca .