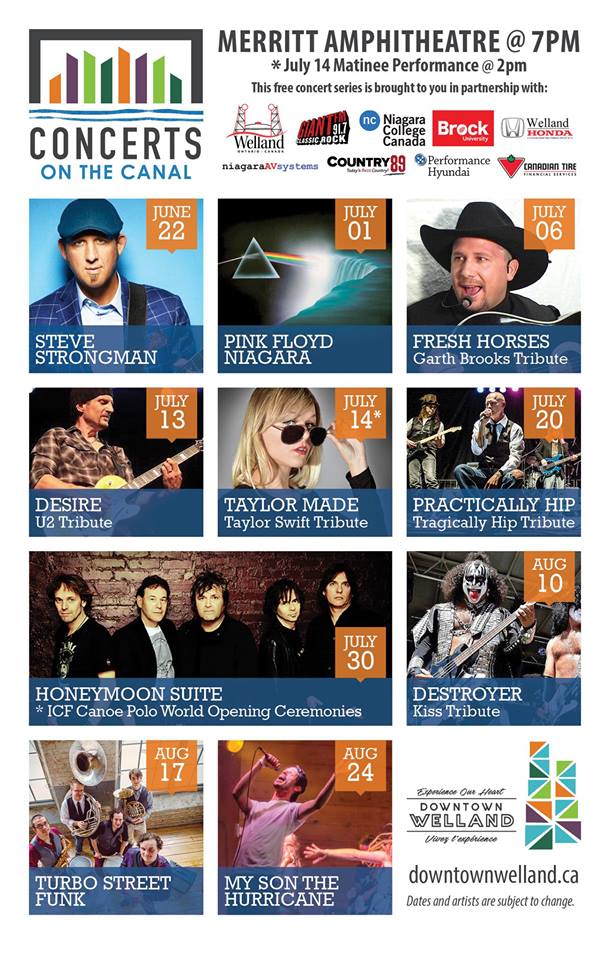 Concerts on the Canal opened a fantastic musical season at the amphitheatre last weekend, and gauging from the audience’s enthusiasm, it looks like this summer’s music festival is going to be a hit. Juno nominee Steve Strongman opened the concert series with a full evening of blues on the waterway.

The second performance in the series opens on July 1, in conjunction with the city’s Canada Day celebrations in downtown Welland. Pink Floyd Niagara brings all the fluid sounds of the original 1970’s artists while taking the more mature crowd a step back in time and introducing classic rock to the younger crowd. This group of talented musicians are recently back from a five-year hiatus and expecting a large audience of fans.

Concerts on the Canal will also feature the sounds of country with Fresh Horses, a Garth Brooks tribute band that not only sounds remarkably like the original artist but also resembles him considerably. People forget that they are watching a tribute band. Fresh Horses typically plays to a full crowd so it’s recommended that you arrive early.

Following Fresh Horses is an impressive list of cover bands with a wide range of musical genres for people of all ages and musical appetites. Desire, a U2 tribute band will also thrill the crowds with the original band’s classist hits and bring the sounds of alternative rock to downtown Welland. Another impressive cover band performance that will inspire singing away a Saturday afternoon is Taylor Made (Taylor Swift tribute band). This band’s performance will have the crowd dancing all afternoon to poprock hits.

Also on the roster this summer and commemorating Canadian music culture is Practically Hip (Tragically Hip Tribute Band). This performance will be a breath-taking evening of nostalgia and celebration. Known as one of the area’s best tribute bands, seats at the amphitheatre will fill quickly so arrive early and be prepared to sing along with the band that has memorialized one of Canada’s most iconic rock bands.

The Canoe Polo World Championships will unite with Concerts on the Canal on July 30, to bring Niagara’s most celebrated glam metal bands to the amphitheatre. Honeymoon Suite will entertain a
thrilled audience and celebrate the beginning the waterway’s most anticipated event of the year. Locals are encouraged to attend the opening ceremonies to enjoy the show and welcome the world to Welland.

Concerts on the Canal will take a huge hard rock turn down memory lane when Destroyer (KISS tribune band) takes the stage and delivers some old 1970’s metal. Crowds will experience the theatrics of hard rock, when bands not only played the part, but also looked the part. Destroyer performs in full costume to give audiences a nostalgic replica of the 1970’s original band. The summer comes to a close when two well-known local bands close the Concerts on the Canal series in August. Turbo Street funk will bring Merritt Park to life with horns, strings, and vocals. This old-school funk band will light the evening on fire with a beat that will have the audience dancing.

The closing night and last performance of Concerts on the Canal brings My Son the Hurricane to the amphitheatre. This original brass-hop funk band makes an entrance that sets the stage for an evening full of surprises. These artists have been touring across Canada but are always eager to play in Niagara.  They always play to a full house and keep the audience alive with music that varies from funk to hiphop.

The 2018 Concerts on the Canal is underway and ready to delight you and the family. The line-up will satisfy the musical palates from a wide variety of genres and keep audiences coming back or more. I’m pleased to enjoy the free and entertaining nights of musical festivities with everyone at Merritt Park this summer. Please join us in celebrating our city, our waterway, and our love for music. See you at the amphitheatre Welland.