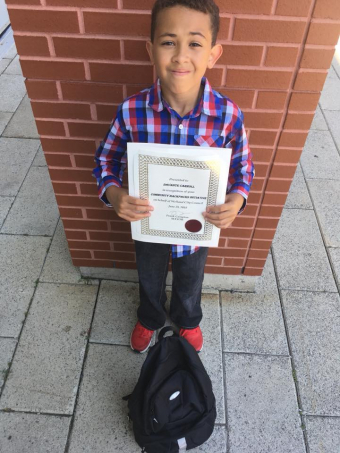 It started quietly, with a private act of kindness from one of Welland’s youngest citizens and the impact was felt in the Mayor’s office and beyond, making a difference for some of the area’s most vulnerable residents.

One day last week, a ten year old boy named Davante Carroll pulled his teacher, Mr. Palmer, aside at Glendale Public School. The boy handed the teacher a letter- and with it, a lesson the community will never forget: you don't have to be powerful or influential to make a difference. You just have to care.

Davante's teacher, who had been sharing some personal stories about a grievously ill daughter with his class, was stunned at what the child had written.

"Davante's caring nature and beautiful words which were written in a card addressed to my family, left me feeling overwhelmed with these incredible emotions. I carried Davante's card around with me for 5 days like a hero badge. I've read it to every person I come in to contact with and it always brings tears to everyone's eyes. Such beautiful words from a 10 year old boy, has even inspired myself to help change the world."

His mother, Tia, was similarly overwhelmed when she heard about her son's letter to the teacher. In this video, with Davante by her side, she shares that letter, why her son wrote it, and the emotional impact it had on her. https://www.gofundme.com/community-backpacks

Earlier this week, Tia said, "Since Davante was a small boy he always expressed his need to help those around him. From opening doors for everyone, to helping the elderly with their groceries, to giving his allowance money to someone in need. This was a character trait that couldn't be ignored. He has always shared with me that he believes that he has been put here on earth to help people and to make a HUGE change. We all know as moms we always believe our child is special but when something magical happens it just makes you wake up and see just how special they really are."

As she explains in the Youtube video, it was in this moment of clarity that Tia, as inspired as Mr Palmer had been, knew she would do whatever she could to support Davante's ideas. And what did Davante most want to do next? "Filling backpacks for the homeless," he said.

Determined to make it happen, Tia turned to her employer, Textile Waste Diversion, a local business that has always supported the community with many different charitable and local initiatives. Daniela Siggia, the company's Vice President of Development, jumped on board immediately.

"TWD is a family business that helps small grassroots charities fundraise with clothing collection. Tia is so dedicated in that cause, it's no surprise that her children are growing up to be responsible community stewards as well. Through her work they have seen the transformative power of community commitment. It's something we're happy to encourage.," She said. "The world needs more Davante's and when we see them, they should be celebrated. We look forward to donating generously to his efforts."

Community Backpacks initial goal of filling 250 backpacks with items geared to men, women, and children that will include a long sleeve shirt, a t-shirt, socks, cloth, toothbrush, toothpaste, deodorant, shampoo, soap, brush, a water bottle and snacks - and a plastic bag to put the backpack in when it rains.

Campion, wanting to encourage and reward the good citizenship and community work of this young man, immediately invited Davante to the Mayor's office - where he was photographed and received an official certificate from the Mayor.

In addition to the formal recognition, Davante was also thrilled to receive a backpack donation for his charity directly from the Mayor! He hopes that Niagara residents will be equally supportive and join him in making Community Backpacks a big success!

Tia says she and Davante are hoping to spend $20 per backpack including the backpack itself with all the items included. They will be starting donations at the Hope Center in Welland and "and then moving our way around the Niagara region and surrounding areas. I want to show my son that no matter how big your dreams are, if you put your heart and soul into something that you truly care about the possibilities are endless!"

This is all Davante's idea," She says proudly, "We're just helping him along the way."