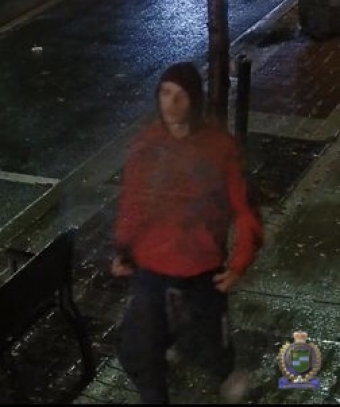 Police are asking for assistance in identifying the male involved, who was observed on video surveillance.

The suspect is described as a white male between the ages of 20-25 years, around 5'8" with a skinny build weighing around 130 lbs.

He was viewed wearing white Adidas running shoes, dark coloured jogging pants with a lighter coloured stripe along the outside of both legs. He was initially wearing a red hoody over a black hoody and removed the red hoody after breaking into Palazzo Salon and was seen leaving the area wearing the black inner hoody.