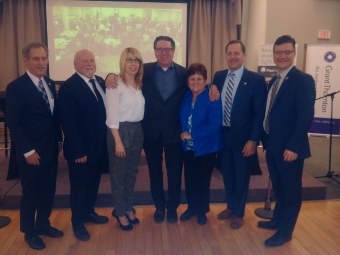 The Italian Hall in Port Colborne was a buzz of activity with almost a full house of local business owners out to hear from six of the region's Mayors about the issues and future for Port Colborne, Fort Erie, Niagara Falls, Wainfleet, Welland and Fonthill.

The participating mayors were:

Mayor April Jeffs kicked off the event by hosting a game show of sorts complete with air horns. After, questions were posed to each of the six mayors allowing an opportunity for them to recap the past year and outline what is to come in their respective cities. GO transit to Niagara, the burning issue in Niagara Falls and the hospital debate for Welland were hot topics.  All six mayors at one point commented on the ability of the municipalities working together with the Region to create a better Niagara. * Mayor John Maloney was home recovering from a stroke in February. He will be back in office in the near future.

Don't take our word for it. Watch it here. The event was live-streamed by Wee Streem