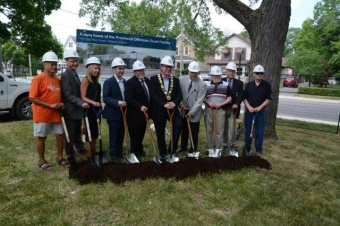 When completed, the Provincial Offences Court Facility will be a single storey courthouse with new public parking areas, landscaping, site lighting, and fencing.

"This Regional investment in Welland is good news for our downtown and will be an anchor on East Main St. that will promote further commercial development in the area. The central location provides easy access to the courts for residents from across the Niagara Region." ~ Frank Campion, Mayor, City of Welland

"The new Provincial Offences Court in Welland will be an investment that benefits Niagara residents and improves their access to the judicial system. Today’s ground-breaking marks the beginning of a project that will support Welland’s development and Niagara’s future growth." ~ Alan Caslin, Niagara Regional Chair

The new Provincial Offences Court Facility will be constructed by The Atlas Corporation on behalf of Niagara Region. The Atlas Corporation has been in business for more than 65 years and has extensive experience in the construction of public buildings of a similar type. They were awarded this project in May 2016 following a competitive bidding process that included a prequalification and tender.

For more information on the new Provincial Offences Court Facility in Welland, including regular construction updates, please visit the Region’s website at http://www.niagararegion.ca/.