Video: WildPlay Niagara Falls Official Opening of the MistRider Zipline - What a Ride!

A flight -- without feathers -- is a rush of fun with exhilerating views. Free your inner #thrillseeker with speeds up to 60km/h.

MistRider Zipline - An experience not to be forgotten!

Since being invited to the official Grand Opening Ceremony at WildPlay Niagara Falls' MistRider Zipline my heart was pounding and nightmare's for a week at the thought of the ride. I'm not a lover of heights, or speed, but I couldn't give up the opportunity to try the zipline and cover the event for Connecting Niagara. As much as this is a local community platform, it draws attention from tourists every where due to the nature of the articles and content within.  All week, I was fearing getting to the ride and not being able to actually do it.

Today was the day! Myself, photographer Andy Harris and Alan Bunyan arrived in the Falls to VIP treatment. Shuttles from the parking lot, water, cupcakes and a Wildplay bag with information and a treat inside. We wondered around Niagara Falls as any tourist would while we waited for the opening ceremony to start. As we were waiting, we climbed the zipline tower to look across and watch the riders as they zipped by. To my surprise the height was not really bothering me - oh and what a view!  A little flutter here and there, but that was it. So no I'm thinking -- I might just be able to do this! 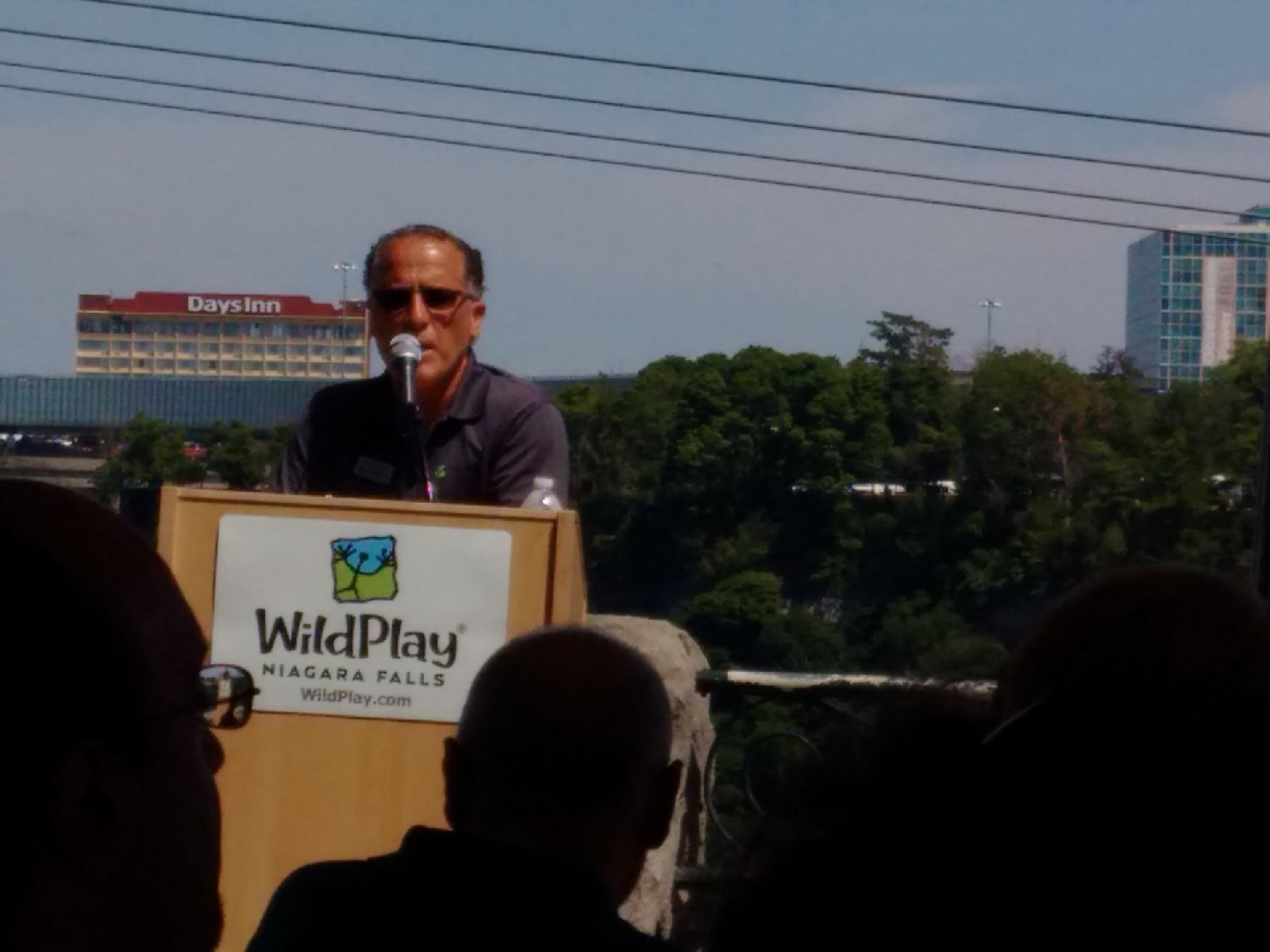 We went back down to the ceremony area where Rich Merlino, General Manager of Wildplay MistRider called everyone to assemble for the official presentation and ceremony. Rich thanked his team for the hard work and dedication that went in to making this attraction come to life. There were many more to thank, but he left that to the speakers following. MPP Jim Bradley, MP Rob Nicholson and Mayor Jim Diodati, all had interesting comments and information to share about the process, what Wildplay means to Niagara Falls and the 12-14,000,000 visitors each year.

Janice Thomson, Chair of the Niagara Parks Commission spoke about the history, the teamwork and the added attraction to Niagara Falls.

"WildPlay's MistRider Zipline to the Falls provides visitors with a breathtaking and authentic Niagara Falls and Niagara Parks experience. This new attraction is in keeping with Niagara Parks other natural attractions, and provides a unique way to interpret the Falls and the Niagara Gorge without impacting the access enjoyed by other visitors to Niagara."

The possibility of the zipline in Niagara Falls was first examined by the Niagara Parks Commission in 2011. WildPlay Niagara Falls is a partnership between some of Niagara's leading hospitality and attraction providers matched with the consulting and technical expertise of a prominent zipline and aerial adventure operator, WildPlay Element Parks. WildPlay has developed five similar locations in western Canada and consults on outdoor adventure projects across North America and the Caribbean.

"The experience of WildPlay's MistRider Zipline to the Falls doesn't stop at the scenic views, though they are unlike any other experience," says Tom Benson, CEO of WildPlay Element Parks. "By giving people a way to explore the outdoors that is interactive, edgy, and fun, we further our mission of helping people go beyond their perceived limits, in a risk-managed environment, in order to realize the great self-confidence that exists just outside their comfort zone."

Once the speakers were finished, the dignitaries moved to the zipline tower for the official ribbon cutting and kicked off the trial rides by those attending the grand opening. Mayor Jim Diodati was one of the first to try the MistRider zipline - suit, and tourism socks and all... and then it was our turn... 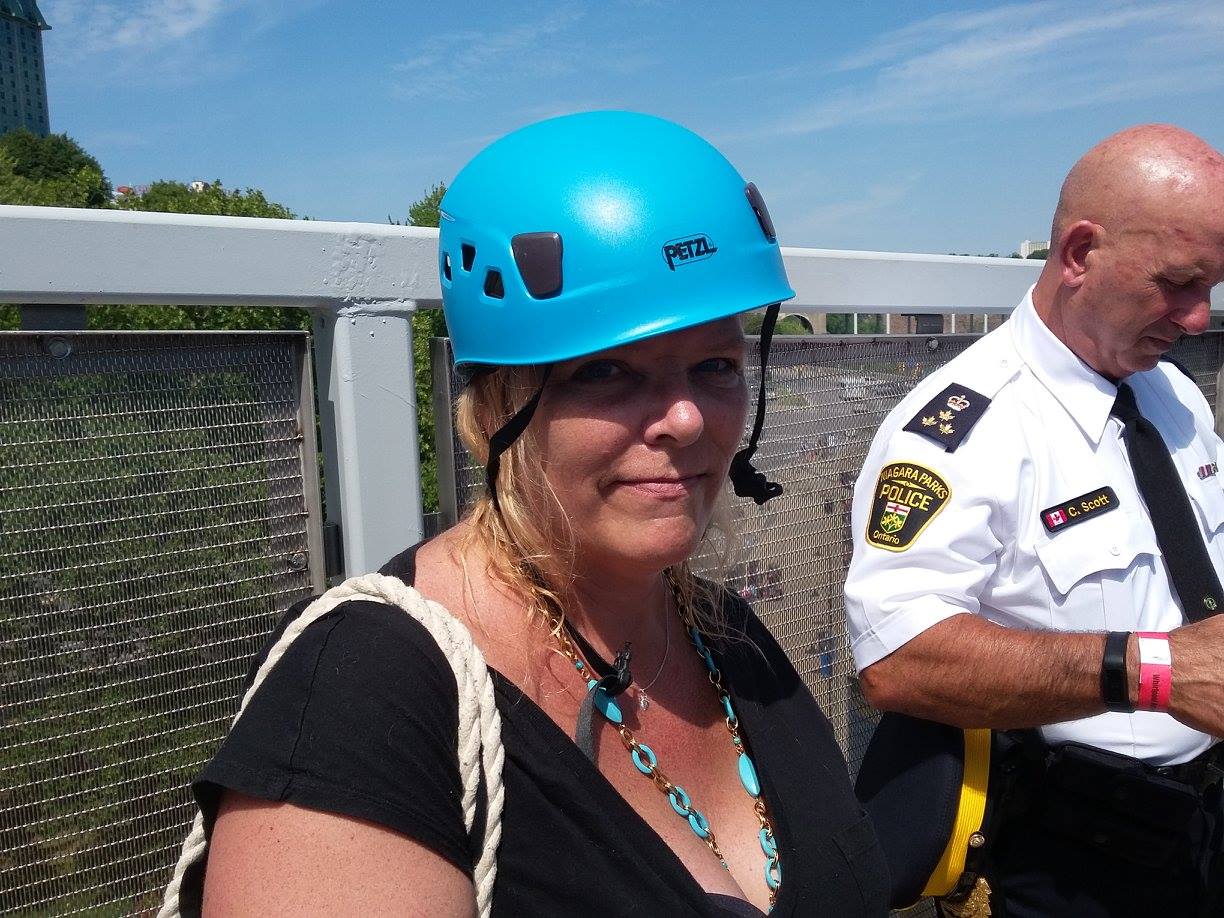 Again, a little hesitant, worried my fear would stop me from trying the ride once I was actually at the top of tower and waiting my turn -- wow was it hot. Andy, (photographer I mentioned earlier) strapped a go-pro on me and two on himself. We adjusted our helmets and inched forward in the line. My heart doing a little flutter hear and there again.  Oh -- guess what - we're up next.  First, the fun part, getting strapped in to the harness and jackets, getting our gear stowed in the built-in backpack -- oh and removing my shoes so they didn't fall off during the ride (I had sandals with no straps on).

Now, the arrangements - we want one side, the people in front of us what the same side... All I was thinking was these awesome MistRider team members are probably wishing all us media folk would get out of there as the tourists are probably easier to deal with.  Anyway, we did end up with the lines we wanted - me on the outside, Andy on the right of me and Alan down below prepared to film as we went zipping by.

... and we're off. My heart caught in my throat just as we went through the gate. I'm thinking - what am I doing. I don't like heights, I don't like speed... but hey! This really isn't that bad. It's almost fun. I even remembered to pan my arm around to capture more with the go-pro - amazing, I'm thinking!

The view is fabulous, the wind in my face felt wonderful and cooling after standing in the sun and 29 degree temp of the day.  Oh wait -- Andy is getting ahead of me - better catch that on video. I bring one arm in, and move the other toward Andy only to discover I'm turning the whole mechanism -- not good -- a little shriek emits from my throat. I can see Andy look my way and off he goes.  The people two over are yelling all the way down.

Okay, so now I'm focused on the ride ahead again -- and the trees drop away, just water below. The smell of the water hits me like a ton of bricks. More heart fluttering as guess what - I looked down! Eyes forward now, I relax again, only to find we are approaching the base. Faster and faster it is approaching. I'm thinking where are the brakes? We were told to hold on the plastic and spread our legs for the landing but that was it. The towers are almost here -- how are we going to stop? We're going to be pancakes when we hit those towers. Where are the brakes?

Smack! Nope we didn't hit the tower, coincidentally that was the noise I think I heard when the catch system stopped me cold turkey! I say I think I heard, because at this point I let out a bit of a shriek again... And done! The ride was over. I survived. I didn't have a panic attack or a heart attack - and guess what, it was fun and I enjoyed it!

Reliving to write this article has almost been as much fun. I can hardly wait to see the video  -- waiting, waiting.... 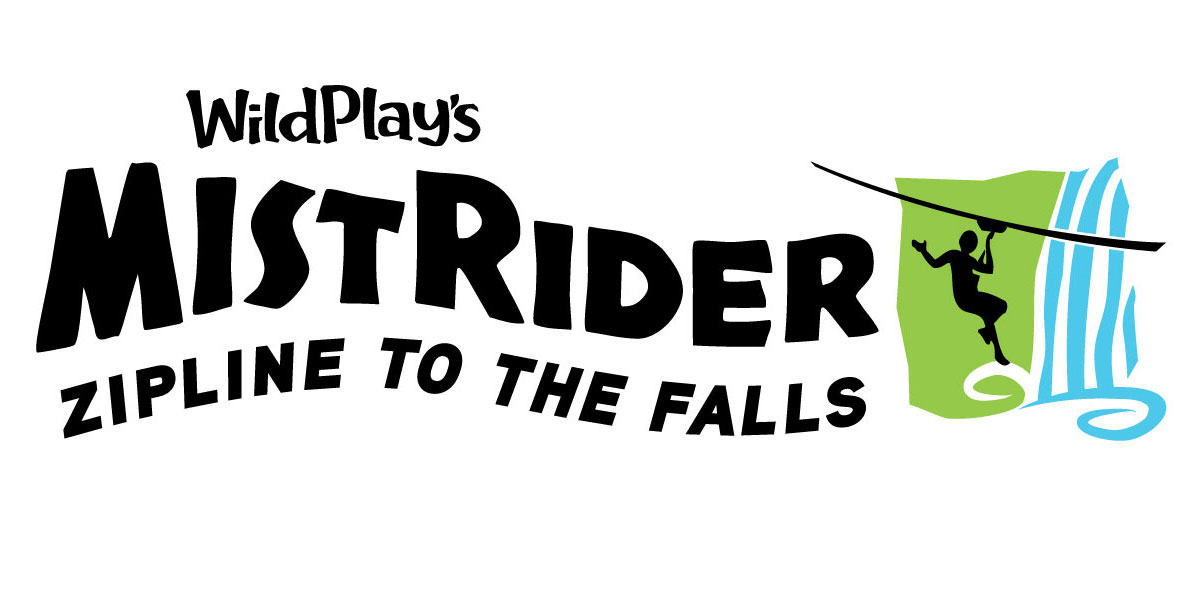 WildPlay's MistRider Zipline to the Falls is open until October - from $49.99

A flight -- without feathers -- is a rush of fun with exhilarating views. Free your inner #thrillseeker with speeds up to 60km/h. The element includes four parallel ziplines that descend 2,200 feet (670 metres)! Four people can zip at once, side-by-side. Snap picture-perfect views of the American and Canadian Horseshoe Falls - an exclusive Niagara experience. www.wildplay.com