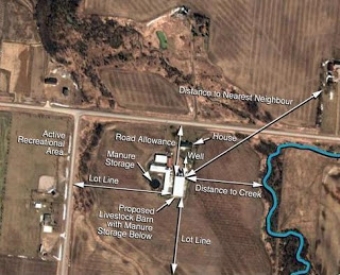 So, a bit of an issue brewed throughout the summer: minimum lot sizes for agricultural properties. The issue first arose during a neighbour vs. neighbour clash in an agricultural area in the
Northern-part of Pelham.

Unfortunately, it happens all the time. If two neighbours cannot get along, one or the other enlists the assistance of Staff to enforce various Town bylaws. Staff are often caught in the middle of such disputes. Staff must try to work with the parties after they make formal complaints against each other over various bylaws – like noise, animal control, fences, signs, and clean yard – or for not having proper permits – like for building or demolition, open air burning, or site alteration. Sometimes it’s an immediate neighbour that complains about another, and sometimes it’s someone else. One complaint often leads to counter-complaints and counter-counter-complaints.

This makes balanced Bylaw Enforcement very difficult for Staff; Staff act as impartially as possible, while focusing on the overall resolution of all complaints between arguing neighbours. And, in extreme circumstances, any of the complaints could form part of a court or other quasi-judicial proceeding.

In a particular case in June, one party used the Town’s Zoning Bylaw to try to resolve disputes with his neighbour.

You see, Pelham’s 1987 Zoning Bylaw includes a 10 hectare (approximately 24 acre) “minimum lot size” for agriculturally zoned properties. If a property-owner has less than 24 acres – the complainant reasoned – that owner cannot have farm animals.

Initially, Town Staff also enforced this complaint as a way to help find resolution between the neighbours for all their disputes.

Then, the one party called the media and set-up petitions about the Zoning Bylaw complaint. And the concern spread like wild-fire. If “minimum lot size” can be used against someone farming on 10 acres – reasoned the argument – perhaps it can be used against my farm on three, five, 10, 12 15, or 20 acres.

Staff dropped the enforcement two weeks later, because – as we learned at Council on July 25 – that provision of the Zoning “applies to the creation of new lots” only and that “existing lots are recognized.”

Instead of something arbitrary like minimum lot sizes, the Province actually provides rules for the types and number of animals allowed on a property based on their impact (odour, waste, etc) and their proximity to neighbours. This formulaic calculation, called Minimum Setback Distances


(MDS), is already embedded in our existing Zoning Bylaw.

So, since we are currently rewriting and updating the Town’s overall Zoning Bylaw, Council and Staff we will work together with agriculture property owners, the Federation of Agriculture, and the Province to clarify the “minimum lot size” and MDS provisions so that we might settle the matter and “preserve our unique urban and rural blend.”


You may contact Mayor Dave at mayordave@pelham.ca  and view past columns at www.pelhammayordave.blogspot.ca .