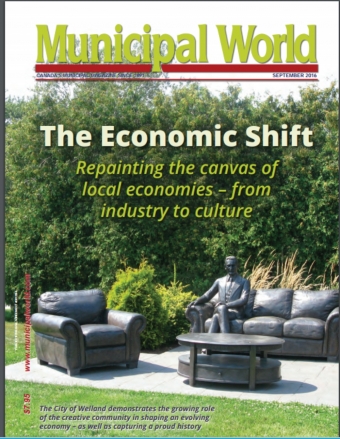 “The Economic Shift” is a description of Welland’s economic history and the emergence of arts and culture left in the wake of Canada’s declining industrial revolution.

Welland, ON - The City of Welland is featured in the September issue of Municipal Worldmagazine with an article written by City staff member Bernice Booth, Corporate Communications and Marketing Coordinator. The article “The Economic Shift” is a description of Welland’s economic history and the emergence of arts and culture left in the wake of Canada’s declining industrial revolution.

The City of Welland, along with other municipalities, are readjusting their marketing strategies, and place branding due to growing competition between municipalities for investors and population growth.  Chronicling Welland’s manufacturing history by way of a municipal journal is part of the City’s communications strategy to increase Welland’s profile on a national level, communicate Welland’s story, and move forward with the City’s rebranding. With GE’s recent announcement to build a “Brilliant Factory” in Welland, there has been a broader focus on the City’s economic restructuring and transition from a traditional manufacturing economy to a knowledge economy. The article narrates Welland’s shift from a manufacturing City, while it continues to embrace and nurture its industrial and creative communities.

The article highlights Welland’s history as a booming City and leader in advanced manufacturing, and further explains how arts and culture has urbanized the socioeconomic development of the City and its communities. Gary Long, CAO of the City of Welland says that Welland needs to continually reinvent itself as a municipality in order to stay current, relevant, and compete in a global economy that attracts growth and investment. “The Municipal World article focuses on another aspect of our economic shift being the emergence of a “creative economy” based on arts, cultural, and sporting initiatives that are largely due to the City’s heritage and vibrant multicultural communities,” said Long.

Municipal World magazine is an independent publication, published monthly in the interest of good municipal government. For more information visit municipalworld.com. The “Economic Shift” can be viewed on the City’s website at http://www.welland.ca/MediaRelease/MW-Sep2016.pdf