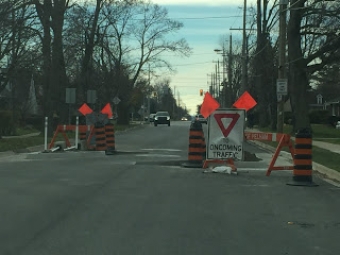 The Town has grappled with ways in which to help calm traffic and make it safer for drivers,
pedestrians and cyclists for a number of years.

More than a decade ago, the Town implemented “Community Safety Zones” on Haist Street
(near AK Wigg School) and on Pelham Street (near GA Green School) to double the normal fine
for speeders. We have added flashing lights in most school zones and employ a team of
dedicated crossing guards help local students to cross the road.

To make it safer for folks to cross the street, we’ve added new crosswalks. We also added a
traffic light at Pelham and Port Robinson and improved the pedestrian crossings on Regional
Road 20 at Pelham and Haist Streets. We have also added stop signs to better regulate traffic –
Quaker at Line, Port Robinson at Station, Canboro at Balfour, and Sawmill at Wessel.

To help slow traffic we’ve added steed bumps to Haist Street, and narrowed the road width on
Regional Road 20 (up the hill between Canboro and Church Hill), and in Downtown Fenwick.
We’ve painted center lines and edge lines on a few roads to make them appear narrower so
that drivers slow down. We even installed pilons on Pelham Street at Port Robinson because
some drivers insisted on ignoring the school crossing guards and put children’s safety at risk.

Because of ongoing speeding and persistent resident complaints, staff set-up a temporary traffic
calming measure – called a chicane or a bulb-out – on Haist Street North last October. Staff
monitored the results and compared the pre- and post-speeds; the test showed that speeds
reduced up to 10 km / hour and drivers travelled at the posted, community safety-zone speeds.

That’s why Council approved funds for a chicane in the 2016 budget and Council reaffirmed the
installation in June.

Staff worked with a contractor this November to install the calming measure. Immediately
following the opening of the chicane last Monday, Staff discovered that the vehicle-travel path
was too narrow. (I don’t know why the normal construction mantra – “Measure twice, cut
once.” – didn’t pinpoint the error prior to installation.)

Once cleared up this week, motorists can be reassured that the final result will allow for safe
vehicular access, including school buses, emergency vehicles, snow plows and garbage trucks.

Many folks – from all across the Town – complain about speeding drivers. Council will continue
to work together with area residents to develop measures to slow down speeders.

You may contact Mayor Dave at mayordave@pelham.ca or read past columns at
www.pelhammayordave.blogspot.com .