Pelham Changing Through the Years 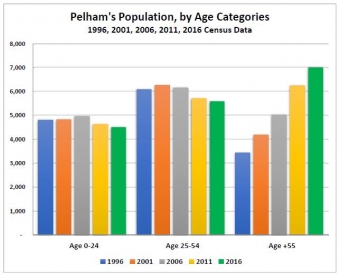 Since Statistics Canada recently released additional information from the 2016 Census, I thought I would
write here about the demographics of Pelham. And, since they also provide information for communities
from the 2011, 2006, 2001 and 1996 Census, one can compare the make-up and changes of our
population over a twenty-year period.

Other large population increases include Grimsby at 80%, West Lincoln at 76%, and Lincoln also at 74%;
compare this with the entire Region’s population which grew by only 33% during that period.

But, the story becomes more interesting when one looks at age groups.

For example, our Town’s population of children and youth (aged 24 and younger) declined slightly (6%) in
raw numbers over the last couple of decades. This cohort numbered 4,820 in 1996 and 4,515 in 2016.
The number of children and youth represented more than 26% of our population last year and
essentially matched the proportion across the Niagara Peninsula (which stood at 27% of Niagara’s total
population in 2016).

Statistics Canada provides some very broad categories for comparison over the last 20 years. For
example, Pelham’s population aged 25 to 54 (the “working-age” population) declined just over 8% from
6,095 people in 1996 to 5,595 in 2016. This working age group counted for 33% of Pelham’s population
in the last census.

(It is important to note that these demographic changes result from both new residents moving here,
others moving away, and from the aging of current residents.)

While one must be cautious about broad comparisons from relatively small sub-sets of our population,
these numbers obviously show trends. Please rest assured that Council and I continue to consider these
demographic realities as we provide public services and develop community economic development
initiatives.

You may contact Mayor Dave at mayordave@pelham.ca or read past columns at
www.pelhammayordave.blogspot.ca.