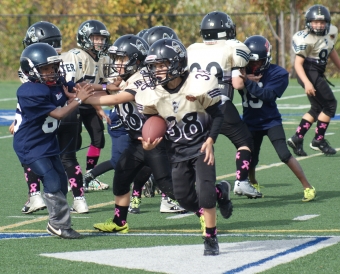 Niagara Generals Tykes Win 20-13 over Vaughan Rebels, Atom and Peewee were not as lucky...

Next Sunday Niagara Generals move on to play Scarborough Thunder  9:30 am in Scarborough.

In Hamilton the Atom Generals lost as Niagara’s coach, Matthew MacRae called the game after the team suffered an unusual number of injuries.
The final score was recorded as 49 to 6 for Hamilton Jr.Tiger-Cats.  Evan McCue intercepted a pass and took it to end zone to score the Generals only touchdown.

Also on Sunday the Peewee Generals suffered a 45 to 0 loss to the Burlington Stampeders in Burlington to end their season.


Photo:
Hunter Gray on his way to score the game winning touchdown in the Tyke Niagara Generals playoff 20-13 victory over the Vaughan Rebels Saturday at Kiwanis field in St. Catharines.
Photo by Brandy Ireland-Keus