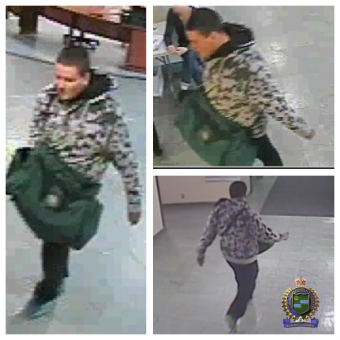 The accused, David Stout, has admitted in a statement to police that he sprayed "dog irritant" in an incident at 301 St. Paul Street in the City of St. Catharines on Tuesday March 27, 2018.

Samples from where the substance was sprayed were collected and are now being tested at the Centre of Forensic Sciences. to confirm that.

Detectives with 1-District (St. Catharines) Criminal Investigations Branch (CIB) are now also investigating a similar incident, believed to involve the same suspect that occurred at another location in the City of St. Catharines, prior to the incident at 301 St. Paul Street.

Investigators are once again asking the public for their assistance and are requesting anyone with information of either one of these matters or any other similar incident to contact them at (905) 688-4111 Dial option 3, Badge 9533.

At approximately 11:30am on Friday March 30, 2018 the investigation by the 1 District Criminal Investigation Branch (CIB) led to the identification and arrest of a male suspect.

29 year old David Stout of the City of St. Catharines is facing the alleged charges of:

Stout is being held in custody pending a bail hearing at the John Sopinka Courthouse in the City of Hamilton on Saturday March 31, 2018.

Detectives continue to investigate to determine what substance was discharged in the building.

Thank you to the media and the public for their assistance in this investigation and their commitment to assist the NRPS.

Niagara Regional Police Detectives are searching for a suspect after a noxious substance was sprayed in the Ministry of Transportation building in downtown St. Catharines.

The incident was reported to police on Wednesday March 28, 2018.  The investigation by 1 District (St. Catharines) Criminal Investigation Branch (CIB) has revealed that at approximately 12:50pm on Tuesday March 27, 2018 a male entered the building at 301 St. Paul Street in the City of St. Catharines.

Surveillance footage of the incident shows the suspect spraying a noxious substance in the elevator area on the second floor of the building.

Victims in the immediate area were affected by the unknown substance.


Information on crimes can also be submitted anonymously using Crime Stoppers of Niagara.

Telephone - 1-800-222-8477 (TIPS)
Online - http://niagaratips.ca/
Text - 274637(CRIMES), keyword Niagara, then your tip.
Crime Stoppers guarantees that you will remain anonymous through any of the methods offered to provide tips. You may also be eligible to receive a cash reward of up to $2,000 if the information leads to an arrest.