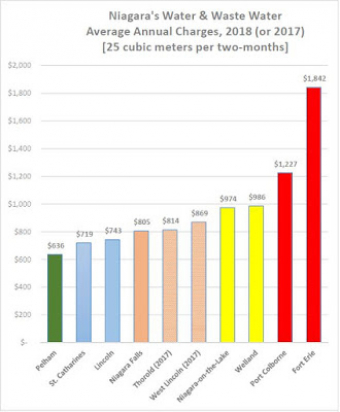 I am delighted that Council is set to approve a water and waste water budget at our next meeting where Pelham’s charges will be the lowest across Niagara again. While we plan to increase the fixed component slightly, this change will mean an increase of $8.76 per year or 1.4% for the average residential home (that uses 25 cubic meters of water every two months).

How do Pelham’s water and waste water charges compare with others Cities and Towns in Niagara? And, how are we able to keep rates so low?

Best in Niagara Yet Again:

I reviewed the most up-to-date rates and calculated the fixed charges and the rates for both water and waste water for Pelham and for the other local municipalities. At $106 for two months (for the average residential use of 25 cubic metres) Pelham leads the pack again with the lowest combined water and waste water charges!

Two of our neighbouring municipalities – St. Catharines and Lincoln – are between 13% and 17% more expensive than the combined water and waste water charges for Pelham. Five others – Niagara Falls, Thorold, West Lincoln, Niagara on the Lake, and Welland – are 25% to 55% more expensive. Two – Port Colborne and Fort Erie – are 93% and 189% more expensive than Pelham. (The average charge is $360 more (or 57% more) per year than Pelham’s charges!)

You will recall that prior to 2010 the Town measured water usage and calculated waste water charges with old gallon and cubic meter odometer-type wheel meters – many from the 1960s, 1970s, and 1980s. Many of the aged-meters counted slowly or were failing/broken. It took two weeks to collect readings. If your water had a leak, it could take months to detect.

In 2010, the Town worked with Neptune Technology to replace and upgrade all 4,200 our meters to electronic, RF (Radio Frequency) meters. In addition to leak, backflow, and tamper detection, it only takes 3-4 hours for staff to collect usage data every two months.

Not only does this cost less and give much more accurate billing, but we also automatically notify residents / businesses by phone if there is a leak or other issue with their water service. And, after replacing all the meters, we reduced our water loss from more than 20% to less than 10%! 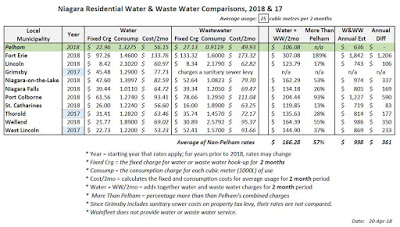 As you know, we have also upgraded significant Town infrastructure over the last number of years. As we reconstructed or improved roads like Haist Street, Pelham Street, Canboro Road, and Hurricane, we also replaced old water and sewer pipes. Over the last number of years, we replaced more than 15 kilometers of cast iron water mains, which helped stop costly leaks and reduces the number of breaks and repairs.

Council and I are delighted that the Town’s investments in innovation and infrastructure save you hundreds of dollars each year and allow us to provide the least expensive water and sewer charges in Niagara yet again!


You may contact Mayor Dave at mayordave@pelham.ca or see comparison charts at www.pelhammayordave.blogspot.ca.