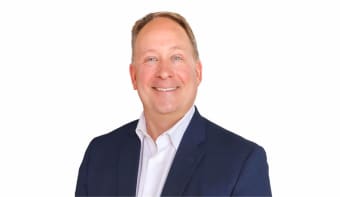 Walters set an aggressive goal to knock on every door in Welland- not once, but twice before October 24th.

Thursday night at Evelyn's Sandwich Factory on Niagara Street, Jeff Walters officially kicked off his campaign to become the next Mayor of Welland. Walters gave a speech in front of 35 supporters in the parking lot next to a freshly dug construction site and large, yellow, caterpillar backhoe.

Before hitting on some salient points about his background during the speech, Walters said, "it is not for nothing that we are just down the street from Mayor Campions campaign office. I think it is symbolic because we too are part of the fabric of Welland and we want him to hear our voices. "We want Welland to hear our voices", he said, "because you deserve more"

Jeff then recounted his family history in Welland and the Niagara Region and the sense he has of a citizens' obligation, bestowed upon him by his parents.

He lamented, "At one point in my life, I left Welland for professional growth and experience. And life takes some interesting turns. But like a lot of people that leave Niagara, I came back to the people and places that I love. And speaking of interesting turns, today I am very pleased to tell everyone here that I am officially announcing my candidacy to be the next Mayor of Welland."

Walters set an aggressive goal to knock on every door in Welland- not once, but twice before October 24th. There, he says will be “where we put the meat on the bones of our Agenda for the coming years at Welland city council”. Walters coyly laid out what his five tenets were to serve as a hallmark of his administration. “I don't want to spill all of the beans today, however, I stand for greater cooperation in council chambers; I stand for solving Welland's housing crisis- both Housing Affordability and Affordable Housing; I stand for creating greater hope for our youth; and likely one of the things I am most passionate about - our Health Crisis - in particular our mental health and addictions crisis.”

His closing remarks addressed coming back to Niagara in a positive way, “Some of you have known me since childhood, some of you have only met me recently and some of you don't know me at all. One thing I do know about life is that it is a constant growth process, it's an evolution, and for those of you who have known me in the past, but may not know me really as well today, get to know me once again. Those who don't know me, meet me for the first time and get to know me. I think once we have had a chat, the person you need to have in the Mayor's chair on council in Welland, after this election will become crystal clear."

More about Jeff Walters can be found on his website.

Photo: With his wife Sheryl, Jeff Walters announces candidacy for Mayor of Welland during a kickoff celebration on Niagara Street on Thursday. August 11th, 2022.