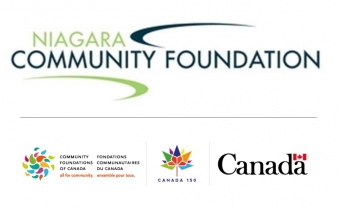 Seven projects in Niagara have received grants totaling $60,000 to deliver programs that will bring the community together to honour the 150th anniversary of Confederation in 2017.

The projects, ranging from community art exhibits to a memorial book for fallen Welland Canal workers, received grants from the Community Fund for Canada's 150th. This fund is collaboration between the Niagara Community Foundation, the Government of Canada and extraordinary leaders from coast to coast.

"The power of Canada's 150th has inspired so many citizens here in Niagara. The projects we are able to support will continue to encourage and inspire others to get involved. So many organizations and volunteers are committed to strengthening our community and Canada," said Bryan Rose, Executive Director of the Niagara Community Foundation.

"Canada's 150th is a historic moment with the power to bring people and places together as we dream big about our communities and our country," Rose said. "We congratulate all of the grant recipients and look forward to seeing their projects come to life in the coming months."

On Nov. 3, the Niagara Community Foundation will officially launch their Canada 150th Initiatives at their Niagara Leaders Breakfast. The event will feature Jowi Taylor's iconic Six String Nation guitar, Voyageur. The Foundation will also recognize the currently funded Canada 150 projects, announce opportunities for funding in 2017 and share the exciting initiatives of the Foundation's Make Your Mark campaign.


The following projects were awarded Canada 150 funding in this round:


Tickets for the Niagara Leaders Breakfast are still available here or by calling 905-684-8688.

Created in 2000, the Niagara Community Foundation has raised more than $28 million in endowment funds, where the capital is invested, and has granted almost $8 million to charities working in the arts, heritage, environment, social services, health, education, recreation and community development.  The Foundation is fully accredited with Imagine Canada's Standards Program which is designed to strengthen public confidence in the charitable and non-profit sector.